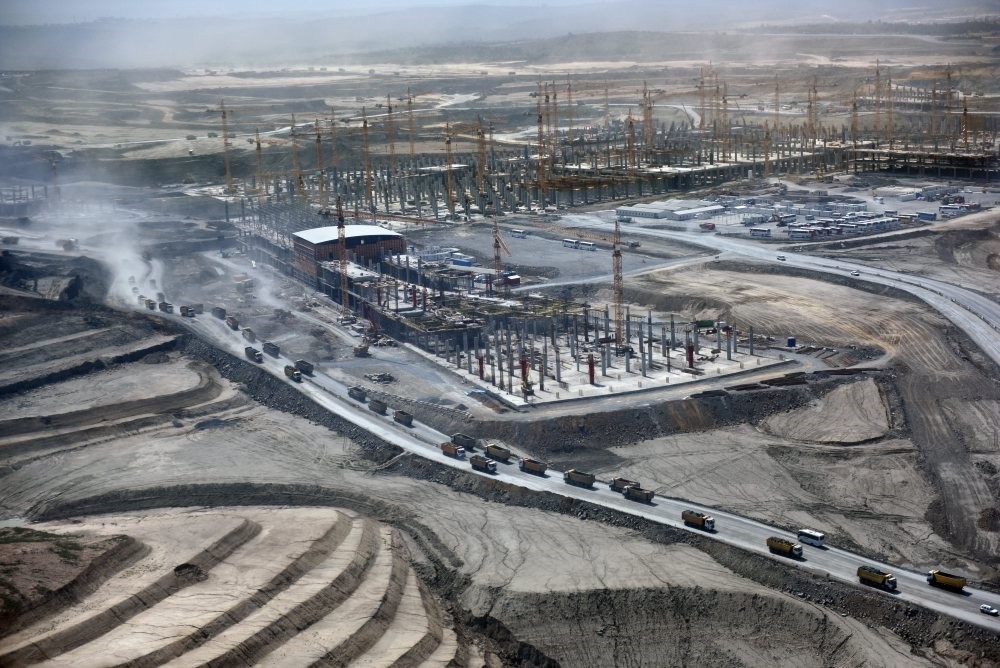 The third airport being built in Istanbul is almost half complete. It is planned to make the first part of the huge complex, with a passenger capacity of 90 million per annum, operational early next year. (Photo: Sabah / Kutup Dalgaku0131ran)
by Barış Şimşek Apr 15, 2017 12:00 am

Turkey has purchased tomography machines to show the U.S. and U.K that security measures in place are being constantly improved and are more advanced than the norm across the world

Transportation Minister Ahmet Arslan said four separate tomography machines, with top-of-the-line imaging technology using penetrating waves, will be installed at airports in response to electronic bans on flights taking off from Turkey by the U.S. and U.K.

Arslan, speaking to journalists, said two of the new machines will arrive on April 28, with the other two arriving in late June. "By installing these machines, we will show our American and British counterparts that our security arrangements at our airports surpass those of their own."

He said letters were sent to the transportation secretaries of both the U.S. and U.K outlining measures taken, as well as those that will be taken in the near future. "Technical discussions with the U.K. have made some progress. Our security precautions go beyond those outlined by the International Civil Aviation Organization. We invited technical delegations from both countries to come and inspect the airports. They accepted our invitation but no delegations have arrived yet."

Tomography machines will be installed right before passengers enter the boarding bridge. "Everything a passenger carries, including laptops, tablets and every sort of liquid, will be inspected in detail before they board a plane," the minister said.

The two countries imposed the ban last month on flights from eight countries, including Turkey, citing Daesh threats. However, some local experts argue that the imposition of the ban is directly related to Istanbul's growing image as a regional transportation hub, especially in light of the huge third airport being built.

Speaking about the new airport, Arslan said 44 percent of the project was complete. "Some mechanical parts are being produced and assembled abroad before being brought here. If we look at the payment schedule of the project, we have already paid 53 percent of the total amount. The work rate during the winter months was lower than we would have liked it to be. Right now, between 22,000 and 23,000 people are working at the site. Our aim is to increase the work force to 30,000 by June and complete the first part of the airport with an annual capacity of 90 million early next year."
RELATED TOPICS