At home, at peace: Diyarbakır enjoys calm in historic site 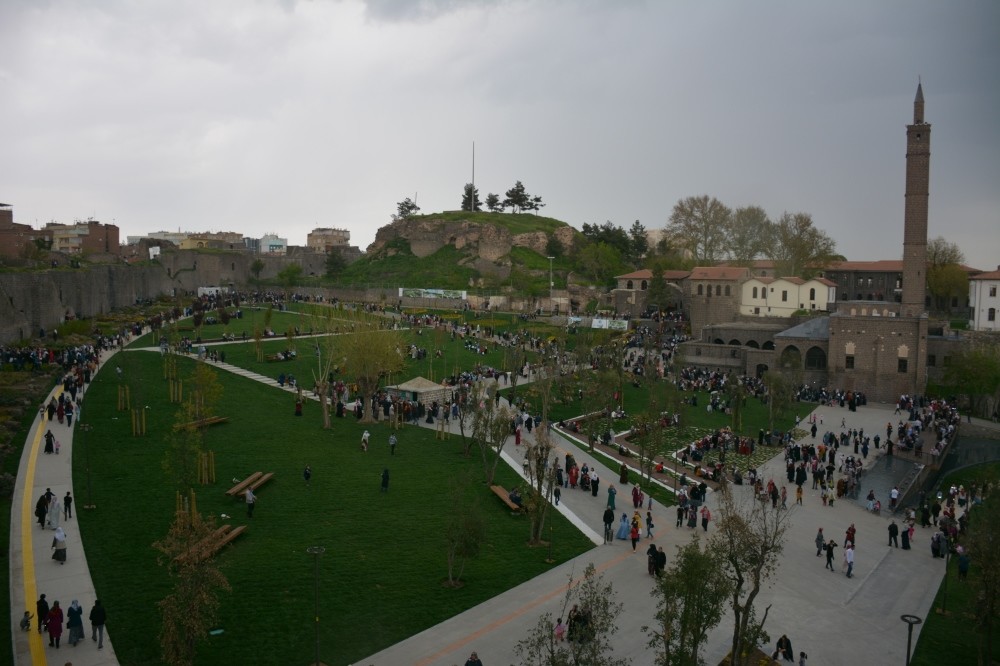 The historic citadel of Diyarbakır, the southeastern province of Turkey rocked by PKK attacks, has sprung back to life after a restoration process in the aftermath of anti-terror operations. İçkale, closed to visitors during the period of terror, has seen a boom in visitors praising the prevailing peaceful atmosphere

Months after an anti-terror sweep by security forces dealt a blow to the PKK terrorist group, the southeastern city of Diyarbakır is now enjoying a calm period. Once afraid of stepping outside, the people of Diyarbakır now flock to the historic citadel, İçkale, as the prospect of a peaceful life prevails. Located in the historical Sur district, İçkale, famous for its city walls, hosts large groups of visitors climbing the stairs to the top of the walls or simply sitting on benches in the green spaces as spring takes hold. The Ministry of Environment and Urban Planning has launched a restoration project at the site, which has been the scene of numerous PKK attacks.

The restoration work extended to the slums surrounding the citadel where dilapidated houses occupied by impoverished families were once located. In an area covering 115 acres, the ministry restored the place to its former glory by building parks and restoring the crumbling city walls as well as the tombs of the first Muslims who conquered the city.

Amazed at the transformation of the area, visitors have heaped praise on the authorities, a sentiment reflected in the long lines waiting at the entrance to the citadel.

Speaking to Anadolu Agency (AA), Hürriyet Çelik, a local who has lived in Sur for 22 years, said she likes the new site. "I used to come here often, but it was in really bad shape. There would be crowds but no place to sit for a rest. It was dirty and chaotic. I thank everyone restoring it. I hope they do it in other historical places in Diyarbakır as well," she said.

Hacı Ramazan Üçdağ, another visitor, says the new state of the citadel is "perfect" and their only problem is the overwhelming crowd of visitors.

Hediye Yıldız, who visited the citadel with her family, says the citadel is "beautiful" once again and praised the restoration work.

Diyarbakır is the largest city in Turkey's southeast, but it also became a hotbed of PKK activity since the terrorist group's inception in the 1980s. Exploiting the city's largely Kurdish population, the group both recruited militants and attacked anyone opposing its presence there. After a brief lull, the PKK started its violent campaign two years ago in the southeast, with attacks growing in intensity every day. Hundreds of security personnel and civilians were killed before a major anti-terror operation started last year. Sur and the rest of Diyarbakır were cleared of terrorist groups last year after more than 100 days of counterterror operations, during which troops and police officers swept through the streets where heavily armed militants held the public hostage.

In the aftermath of the operations, Ankara vowed to rebuild the areas in the city affected by terrorism. In February, authorities officially launched a project to build new residences for the people of Diyarbakır whose houses were destroyed or damaged in the terror attacks.

Plans to rebuild the district will see the demolition of housing units not in line with zoning plans and buildings that were heavily damaged during the terror campaign.

Turkey will also build 5,637 apartments for the city's residents to address the housing shortage following the damage on residential areas by the PKK. The construction of some 1,000 apartments is scheduled to be completed by the end of 2017, according to local media outlets.

Authorities also plan on building more than 8,800 residences in other regional towns, including Şırnak, Cizre, Silopi and İdil, where the PKK launched a group of attacks in 2015 following the declaration of the end to a unilateral "truce" with Turkey.

Parts of Diyarbakır's Sur district are listed as UNESCO World Heritage sites, and the government has pledged to restore those sites to their former state as well, reinvigorating the slow economy in the region that has struggled to grow.