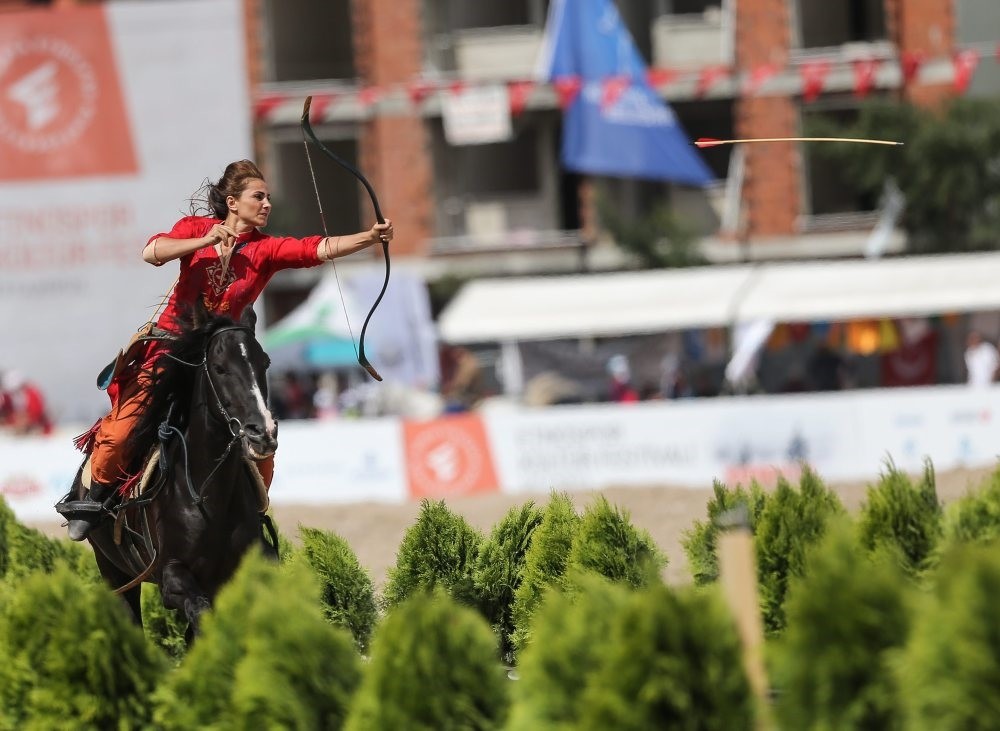 Kicking off in Istanbul on May 11, the Ethnosports Culture Festival looks to revive sports and traditions of Turkic communities. At the event, archers and wrestlers will compete in traditional sports and a fair showcasing culture of Turkic nations will be held

Istanbul gears up for the second Ethnosports Culture Festival that introduces centuries-old sports in Turkic countries to young generations. From horseback archery to oil wrestling and board games of ancient Turkic communities, the festival gives insight into Turkish culture from Central Asia to Turkey.

Bilal Erdoğan, president of the World Ethnosports Confederation that organizes the event, joined Minister of Youth and Sports Akif Çağatay Kılıç yesterday at a press conference about the festival. The festival, which was held in August last year in the city's Küçükçekmece district, was moved to a larger venue in Yenikapı on the shore of the Sea of Marmara on Istanbul's European side.

Throughout the four-day festival, organizers hope to revive "forgotten cultural values." Erdoğan said at the press conference that ancient sports might be an element in "rebuilding national identity."

"Our confederation seeks to popularize traditional sports and make them recognized in the world where cultural inequality is prevalent," he said. High turnout in last year's festival encouraged them, Erdoğan added.

Erdoğan stated that they decided to merge this year's edition with Istanbul Youth Fest, whose opening will precede the launch of the festival. "We expect a larger turnout this year," he said.

The festival will host 11 different traditional sports events and the highlight is oil wrestling. An Ottoman-era tradition, oil wrestling is still popular in Turkey, and a centuries-old event in the northwestern city of Edirne where traditional oil wrestling was born, still attracts crowds every year. In the Ethnosports Festival, more than 300 wrestlers will struggle to put their rivals' back on the ground for victory.

In various categories, 843 participants will compete in the festival that will also host stands promoting culture in cities in the Anatolian heartland, Central Asia and the Balkans. The festival will include a section dedicated to children who will be able to learn about 26 games that children of ancient times played. Erdoğan said they also dedicated a segment for handicapped athletes in mas, a type of wrestling, in mangala, a board game competition, and in traditional archery events.

Bilal Erdoğan said the event will also host the performance of the Ottoman Janissary band, the mehter, and folk dances dating back to early Ottoman times. In a nod to Central Asian roots, visitors will be taught a brief class about ancient Göktürk alphabet while ironsmiths, a staple of Turkic social life in the past, will perform at the festival. Twenty-eight types of traditional handicrafts will also be introduced to the visitors at the stands set up at the festival grounds. A model village showing life in a traditional Turkic village will also be installed at the venue.
Last Update: May 03, 2017 8:42 pm
RELATED TOPICS