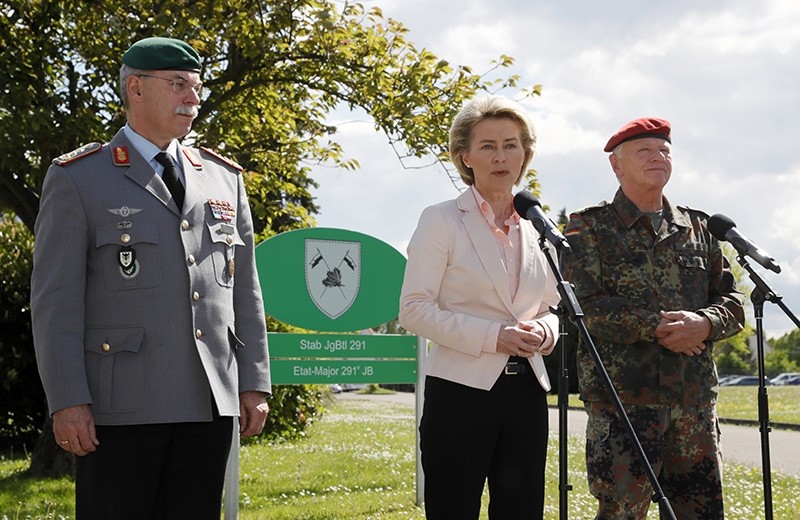 German investigators have found Nazi-era military memorabilia in a barracks, similar to that found in the garrison of an army officer arrested on suspicion of planning a racially motivated attack, the Defense Ministry said.

The discovery broadens a scandal about right-wing extremism in the German army that has hurt Defense Minister Ursula von der Leyen, a close ally of Chancellor Angela Merkel, less than five months from a national election.

Spiegel Online reported that a display cabinet containing Nazi-era Wehrmacht helmets stood outside the canteen at the Fuerstenberg barracks in Donaueschingen, in southwest Germany.

In addition, pictures of soldiers from the Wehrmacht -- the Nazi regime's army -- hung on the wall of a room in the barracks, where Wehrmacht pistols, more helmets and military decorations were on display.

Investigators found a similar room at a barracks in the French town of Illkirch, where the officer arrested last week on suspicion of planning a racially motivated attack was serving in the German-French Brigade.

A Defense Ministry spokesman told Reuters the objects found at the barracks in Donaueschingen did not include Nazi items punishable under German law such as swastikas. Possession of regular Wehrmacht items is not an offence.

However, on a visit to Illkirch on Wednesday, von der Leyen said she would not tolerate the veneration of the Wehrmacht in today's army, the Bundeswehr.

Von der Leyen provoked criticism from a soldiers' group this week after she criticized what she called "weak leadership" in the military after the officer's arrest on suspicion of planning a racist attack.

On Thursday, she apologized for the tone of her criticism of the military over its handling of the racism case, as she sought to contain a divisive furor in the build-up to national elections.