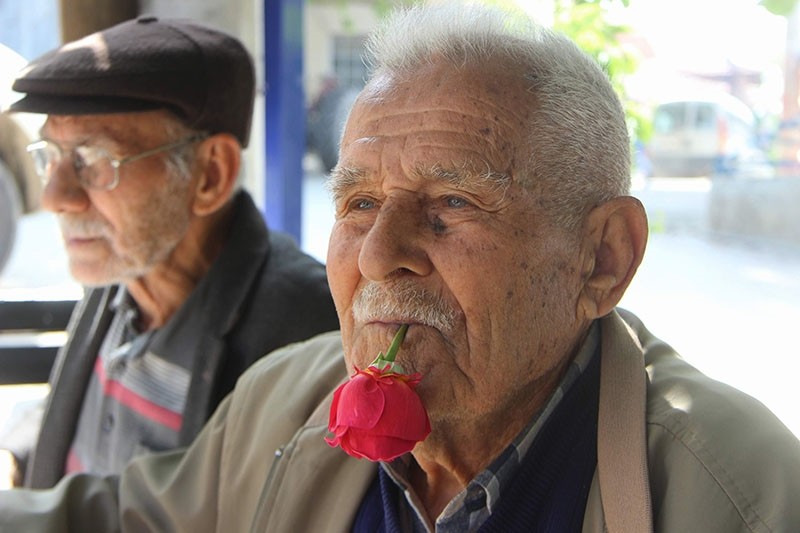 86-year-old man in Turkey's Bursa has been holding a rose in his mouth for the past 59 years to avoid smokinghttps://t.co/r8Xcxomytt pic.twitter.com/XbZ82UqdAv

An 86-year-old man in Turkey's Bursa province has been carrying a rose in house mouth for the past 59 years, a habit he developed after giving up smoking when he was 27, Ihlas News Agency reported Saturday.

Ali Rıza Karan, who lives in Keramet village in Bursa's Orhangazi district decided to quit smoking at the age of 27, when he realized that his smoking habit started to have negative implications for his health.

Smoking around two packages of cigarettes a day, Karan initially struggled to give up the habit, but then decided to carry a rose in his mouth to help him in the process of quitting.

"It was quite difficult for me to quit smoking in the beginning and I tried to look for means to help me quit" Karan said, adding that he started carrying a rose in his mouth, with the hope that it would make him forget about smoking.

"I've been carrying roses in my mouth for the past 59 months" Karan told IHA, adding that he gets roses from his garden in the summer months, and visits nearby Yalova province in the winter to buy roses, at 8 Turkish liras each.

The 86-year-old man reportedly carries one rose in his mouth per week.

He notes that his strange habit draws negative attention when he leaves the town and visits other places.

"I will probably leave carrying roses in my mouth when I die" Karan told IHA.

Smoking has been one of the habits most associated with Turks for decades and even created the expression: "To smoke like a Turk."

Research conducted in 2015 suggested that global smoking rates are on the rise, with over 930 million people smoking daily, compared to 870 million in 1990 -- a seven percent jump.

Estimations suggest that half of daily smokers will lose their lives prematurely as a result of their tobacco habit unless they give up smoking.