Minibus tumbles down the cliff in southwest Turkey, 24 killed 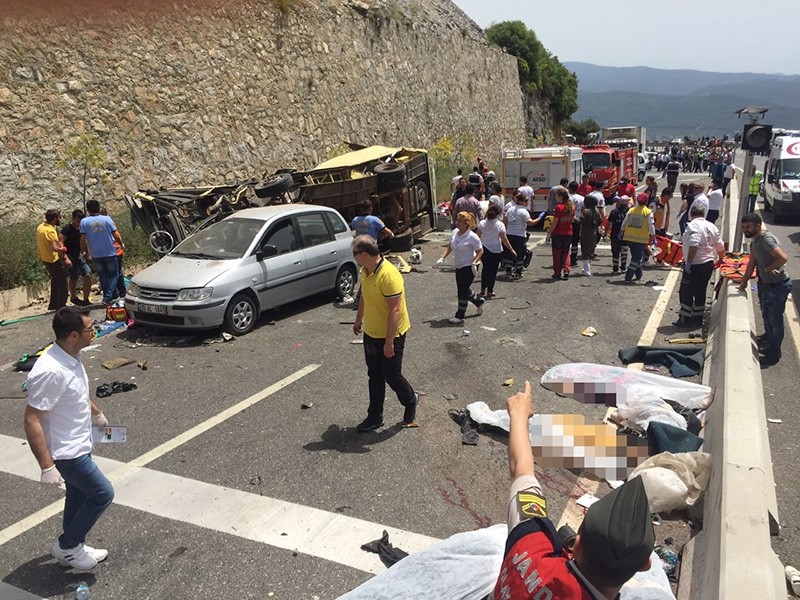 A minibus carrying Turkish tourists tumbled down a cliff on the Muğla – Antalya highway in southwest Turkey Saturday, killing at least 24 passengers and critically injuring 10 others.

The minibus was carrying passengers, mostly women and children, for a weekend trip organized for Mothers' Day from Izmir to the resort town of Marmaris.

The accident took place in the famous and daunting Sakar Pass, where the minibus went off the road at the sharpest bend due to an unknown reason.

Ambulances, firefighters and crews from the Prime Ministry Disaster and Emergency Management Authority (AFAD) were dispatched to the accident scene.

Muğla Governor Amir Çiçek said that 24 people were killed and 10 others were critically injured in the accident. Deputy Governor Kamil Köten said the accident was likely caused by a brake failure.

The highway was closed to traffic for a couple of hours as rescue crews resumed their efforts on rough terrain.

Connecting the famous southwestern Turkish resort towns of Marmaris, Köyceğiz, Dalaman and Fethiye with Muğla city center, numerous accidents take place in the heavily congested Sakar Pass every year, especially during the summer months, despite several improvements made to increase the quality of the road.