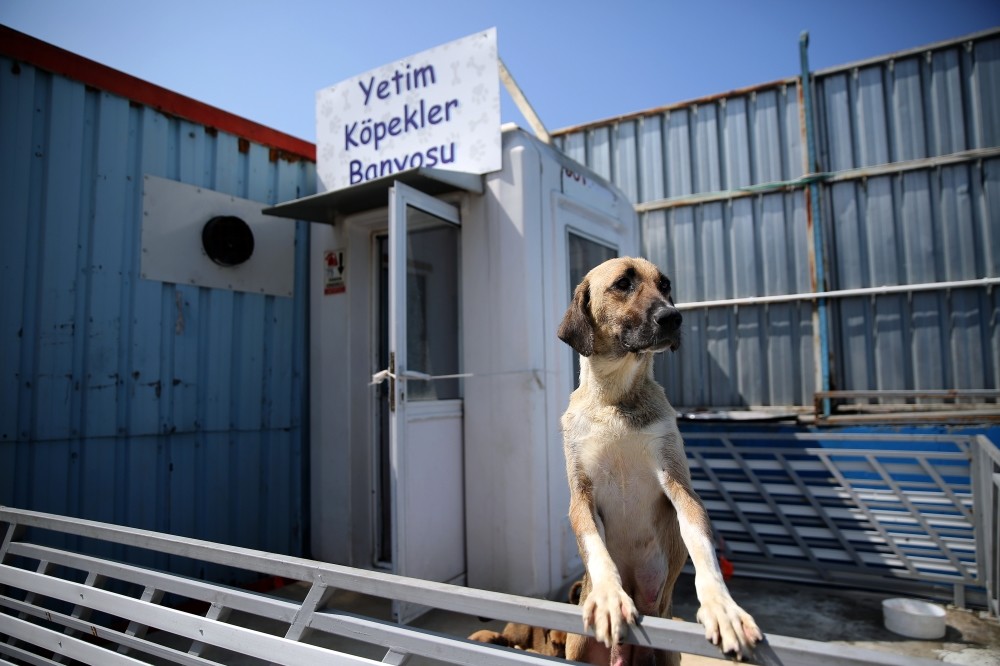 The sign reads ,Bath for orphaned dogs,
by Anadolu Agency May 16, 2017 12:00 am
An animal lover and benefactor businessman living in the Pendik district of Istanbul, Ünal Hekim, has founded an animal food bank, a shelter for homeless dogs and an orphanage for puppies. The food bank, named the "Dead Man's Food Bank for Stray Dogs," offers hot meals for Istanbul's helpless street animals.

In Istanbul, Hekim, who is also a partner and vice chairman of a holding firm, came across a starving dog in bad shape while returning home from feeding stray dogs in Tuzla. At the time, he felt bad that he had nothing in his car for the hungry dog. This incident inspired him to found a food bank for stray animals.

After renting and equipping a space with freezers and supplies in the Güzelyalı district, Hekim hired five cooks and two drivers for food distribution.

The food bank staff comes in the early and prepares food for stray animals by mixing minced bones with bread and potatoes, along with the occasional minced meat. The food is then placed in boxes and distributed to the Şile, Pendik and Tuzla districts of Istanbul. Now, the resourceful strays have learned the food bank's routine and often run out to greet the shelter's drivers.

Speaking to Anadolu Agency (AA), Hekim said the food they prepare for the animals is as hygienic and healthy as human fare. While explaining the delivery system of the boiled mixture that they prepare, Hekim said: "We distribute around 150 buckets of food between Gebze and Şile with two cars. We are not looking for notoriety. We do not accept any support. All of the work is done with our own budget."

Implying that they actually help themselves by taking care of the homeless animals, Hekim said: "What we do actually pays the debt of humanity. If people could see the wounds of these animals, they would prepare a cat room in their house and a doghouse in their garden. Cats bring abundance to a house. They are even helpful in the quarrels between husbands and wives. They feed the houses positive energy."

Asserting that they also cure illnesses and provide therapy for the animals, Hekim said: "We also have a shelter in addition to the food bank. People who want to adopt animals may visit the shelter. There is also an orphanage next to the shelter where we have puppies without parents. We care for them. There are also dogs who have been cured by chemotherapy. We do whatever they need." He also stressed that all of the expenses are being covered by him and that he does not accept any support.

Stating that they distribute food for the animals every day except Sunday, Hekim said: "I won't give up on this work. This is the biggest legacy that I can leave my children. I told them that they would not be needy by running this food bank. I want to pay my debt as a human. This is what I have to do."

Beauty expert and physiotherapist, Sevgi Elik, one of the volunteers of the food bank, said she has been distributing food for 10 years as an animal lover.

Explaining that she always thinks about the strays' well-being, Elik said: "I have prayed a lot at night for the animals. I often prayed for money or an opportunity to help the dogs. Then I met Ünal. God has accepted my prayers. I'm so happy to be feeding these animals."
RELATED TOPICS