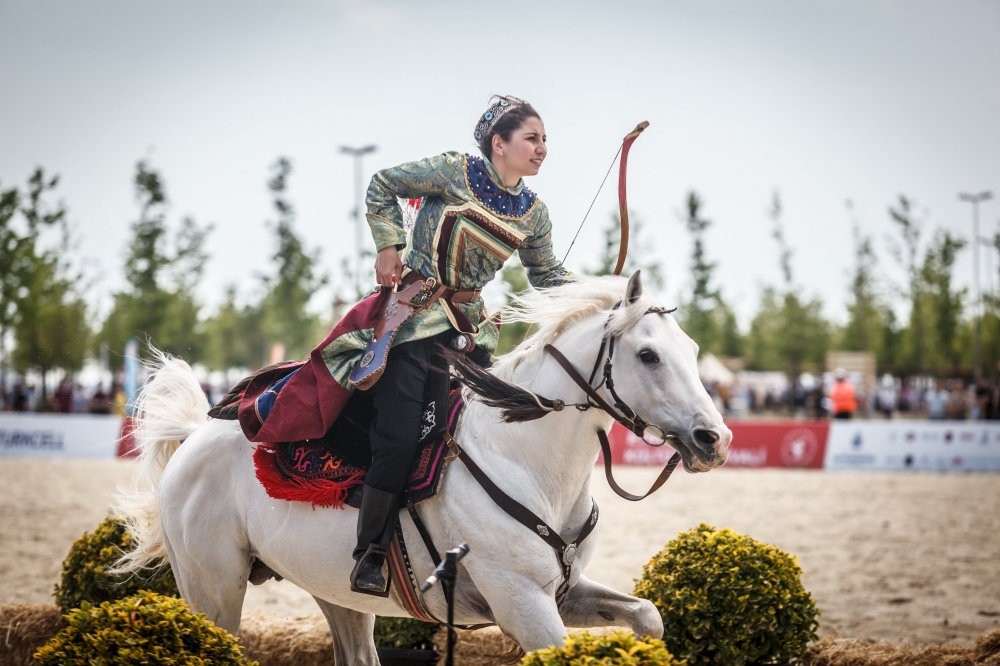 The four-day Ethnosports festival in Istanbul attracted a record 800,000 people, with officials anticipating a growing popularity around the country and the world in coming years

The Second Ethnosports Culture Festival held at Istanbul's Yenikapı Square concluded with a closing ceremony late Sunday. The four-day event saw various events linked to Turkic and Ottoman history and brought life to many traditions tied to Anatolia and Central Asia. The festival aimed to promote and revive sports and cultures unique to ancient Turkic life, with a total of 843 athletes competing in 11 different sporting categories.

In gökbörü or kökbörü, a traditional equestrian sport of Central Asia, riders on horseback try to catch a runaway goat by sliding on their saddles.

In belt wrestling, which has been popular among Crimean Turks for centuries, wrestlers try to put their opponent's shoulders on the ground by pulling on a belt wrapped around the opponent's waist.

As another unique sport originating from Central Asia, aba wrestling is one of the oldest wrestling forms in the world. To compete, wrestlers don an "aba," a coarse woolen cloth, while trying to beat their rivals in this rare and historic Turkic sport. In yet another Central Asian Turkic sport, mounted javelin, which was originally created for mounted combat practice, contestants try to hit opponents with javelins while on horseback.

In the 42 yurts set up in the 800,000 -square-meter venue, ancient rituals that have survived for centuries, such as the celebration of a child's birth, were performed.

Officials said around 800,000 people visited the festival grounds during the four-day festivities.

The World Ethnosports Confederation, headed by Bilal Erdoğan, the president's son, has been campaigning to promote ethnic sports for years and sees the festival as a major boost to keep ancient traditions alive.

"Our confederation seeks to popularize traditional sports and to have them recognized in a world where cultural inequality is prevalent," he said.

The confederation's deputy chairman, Hakan Kazancı, who handed out medals to winners late Sunday, said, "We hope to make it a global event in the next five years, to promote the sports our ancestors favored and to turn the festival into a kind of Olympiad." Kazancı added that their federation aims to revive ancient forgotten sports around the world.

"This year, we had guest competitors from Kyrgyzstan, but it will be a more international event, on a global scale, in the following years," Kazancı said, adding that the number of visitors had increased by more than five-fold since the first festival. He said he hoped the momentum will translate into increased popularity, with similar festivals being held across the country. "We have venues in Kayseri and Gaziantep, and we are working on organizing similar festivals there," Kazancı said.

Kazancı said they had met their objectives in the festival, adding that its popularity had shown that the public was hungry for events that promoted traditional activities. "We are happy with the turnout. We selected one of the most easily accessible places as the venue, and it proved successful. The timing was perfect, too. The first festival was in August, but now we held it in May, which is during the school year. This was also reflected in the larger participation," he explained.

He said the World Ethnosports Confederation was founded in Kirgizstan in 2015, with its headquarters in Istanbul.

The confederation currently has 25 members around the world, he said. "For example, Qatar asked for an ethnic sport on horseback to be included among the games. We hope to do so next year. We aim to include all of the ethnic sports around the world that face extinction due to the pressure of popular sports," he explained.
RELATED TOPICS