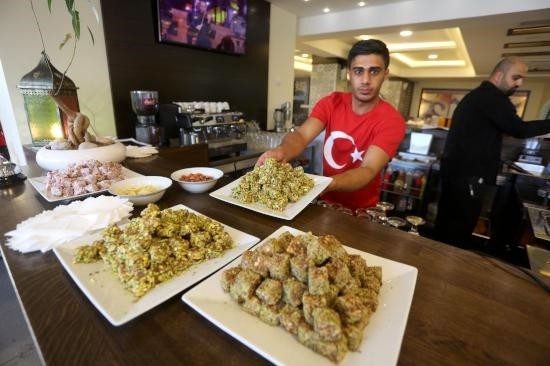 Cementing the historical ties between the two countries, the West Bank city of Ramallah is now bringing Turkish cuisine directly to Palestinians with the country's first Turkish restaurant, Zürna. The restaurant's owner is Palestinian citizen Islam Hijazi, who oversaw the restaurant's opening on May 18. Like many Palestinians, Hijazi has a love for Turkish culture, history, and of course food .

Turkey's ambassador to Jerusalem Gürcan Türkoğlu, Turkish people living in the West Bank and many Palestinians attended the grand opening ceremony of the restaurants, reports said.

In recent years Istanbul has become a popular destination for Palestinians to visit, work, study, and learn Turkish. President Recep Tayyip Erdoğan's profile in the Arab world has played a part in this, as has the international popularity of Turkish TV series such as the Magnificent Century. But while there have been Palestinian restaurants in Istanbul for many years, it has taken time for Turkey's food culture to find a base in Palestine. With 30 workers and an investment of around $1 million, Zürna is a great step in addressing this imbalance.

The hardships of occupation in the West Bank have a stifling effect on Palestinian businesses, which makes Hijazi's success all the more notable. "As you know, we are living under Israeli occupation. They make a lot of difficulties for us. But we managed to complete our project with the support of the Palestinian authorities," Hijazi told the Anadolu Agency.

The three chefs at Zürna are Turkish, while the rest of the staff are Palestinian. Due to the shared geography and cultural ties between the two countries, the chefs can find most of their ingredients locally. But rather than falafel or foul, Zürna's menu features classic Turkish dishes such as beyti kebab, lahmacun, Urfa kebab, and eggplant kebab – not to neglect the ceramic pot kebab that waiters smash with a knife in the restaurants around Sultanahmet. Even the decor at Zürna reflects Turkey, with LCD screens showing views of the Bosporus.

Turkish Ambassador to Jerusalem Gürcan Türkoğlu highlighted the restaurant's importance for Turkey-Palestine ties. "First of all, we have to agree that Turkish cuisine is the most delicious in the world. It presents flavors that are close to Middle Eastern cuisine. The people of Palestine have a very special interest in Turkey and Turkish cuisine," Türkoğlu told the Anadolu Agency.