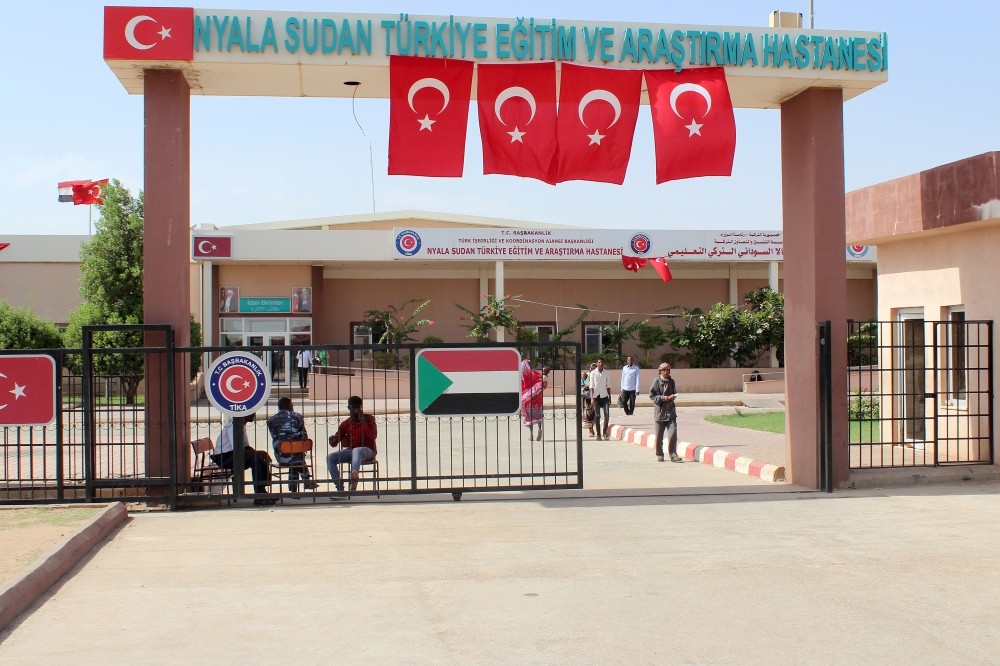 The hospital in South Sudanu2019s Nyala treats about 120,000 patients every year. Turkeyu2019s Tu0130KA also offers training for healthcare personnel across the world, including doctors and nurses in Kyrgyzstan.
by Daily Sabah with AA May 20, 2017 12:00 am

Turkey, the top humanitarian aid donor in the world, also works to literally heal the wounds of the disadvantaged with its doctors and hospitals it built in Africa and in Palestinian territories

Turkey is the world's leading humanitarian aid donor with respect to its gross national income, but the country's aid is not limited to food or other basic needs. With the hospitals it built in African countries and Palestinian territories and employing volunteer Turkish doctors, the country reaches out to thousands from disadvantaged communities seeking treatment. For instance, at a Somalian hospital built by Turkey, more than 70,000 patients receive treatment and medical examination while another hospital in Sudan hosts 120,000 patients yearly. The country plans to increase the number of hospitals with a new one scheduled to be opened in Libya later this year.

The endeavor is part of Turkey's "African opening," a project seeking to boost long-neglected ties with African countries. 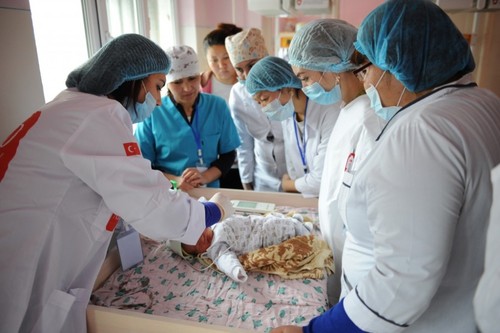 In Somalia, the Somalian-Turkish Research Hospital, which was opened in 2015 in the capital Mogadishu by President Recep Tayyip Erdoğan, provides access to basic health services for poor Somalians in a country struggling to recover from the past conflicts and ongoing campaign of terror. The 230-bed hospital also provides training for prospective Somalian healthcare personnel. The hospital, built for 2 million people living in Mogadishu and towns near the capital, offers services to an average of 6,000 people every month and about 100 surgeries are performed monthly. The place is touted as most modern and best furnished hospital in wider East African region. The hospital's staff includes 47 Turkish nationals, including doctors. With its post-natal wards, intensive care units housing up to 10 patients and four surgery rooms, it stands out among other hospitals in the region. The Turkish and Somalian health ministries currently run the hospital jointly and in five years' time, it will be completely handed over to Somalian authorities. Turkey has also been helping Somalian authorities build a sustainable healthcare model and boost manpower in the Somalian healthcare sector.

A similar hospital was opened in Nyala, the capital of the South Sudan state, three years ago. The Nyala Sudanese-Turkish Research Hospital caters to both the local population as well as patients from nearby countries such as Cameroon, Chad and Gambia. The 150-bed hospital offers maternity care services, pathology units, internal medicine services and urology services. Turkish doctors at the hospital have been training Sudanese healthcare personnel and doctors at the hospital. About 120,000 patients are being treated every year at the hospital by Sudanese doctors and 50 Turkish healthcare personnel.

Another hospital is in the works in Libya's Misrata, which has been devastated by civil war. The construction that started in 2012 wrapped up last year. The hospital was built on a space of about 2,400 square meters and it is set to be opened later this year. With a capacity of treating 200 patients daily, the hospital hosts three wards.

Meanwhile, in Palestinian territories, Turkey built one hospital in the West Bank and is scheduled to open another one in the Gaza Strip.

The Tubas Turkish Hospital in the eponymous town of 40,000 was the first of its kind in the area when it was opened by TİKA in 2014.

The 30-bed hospital caters to about 40,000 patients every year and it is popular among patients from nearby towns.

So far, more than 100,000 patients were treated at the hospital where an average of 6,500 surgeries are performed every year.

The construction was wrapped up in 2015 and the hospital is set to open in the near future. The 150-bed hospital will serve some 1.8 million people in the Gaza Strip.

In the Central Asian country of Kyrgyzstan, the Kyrgyz-Turkish Friendship Hospital is under construction. The hospital will serve some 150,000 patients yearly and will be one of the largest hospitals in the country.

Likewise, in Pakistan's Punjab, the agency built a hospital in 2014 that has served more than 10,000 patients since it opened.

Apart from building modern hospitals in several countries around the world, the state-run agency helps those in need of health services, from meeting patients with doctors sometimes for bone marrow transplants and sometimes, for aesthetic surgery to cover burns.

Combating the Ebola epidemic in Africa was the highlight of TİKA's health services that also provided access to health services for hundreds of thousands in conflict and disaster zones and in impoverished communities.

In the Western African country of Niger, one of the poorest countries in the world where insufficient resources hinder quality healthcare, TİKA built a maternal health and rehabilitation center.

The center primarily offers health services for thousands of women who gave birth in unhealthy environments and at young ages.

At the height of the Ebola outbreak in Africa, the Turkish development agency delivered much needed equipment to healthcare workers.