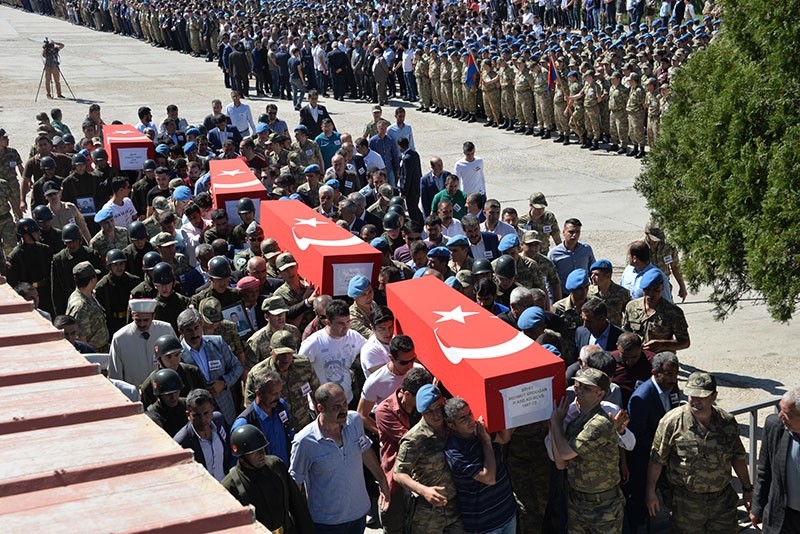 Coffins of soldiers who died in the helicopter crash are being carried on shoulders to placed in military aircraft to be send to their hometowns, in Turkey's eastern province of u015eu0131rnak, June 1, 2017. (DHA Photo)
by Daily Sabah with Agencies Jun 01, 2017 12:00 am

Thirteen soldiers including a general who died in a helicopter crash in Turkey’s southeast late Wednesday received military honors in a ceremony Thursday, with an outpouring of grief and praise for their role in the fight against terrorism

Tragedy struck the military when a helicopter carrying officers hit power lines and crashed in the southeast. A total of 13 soldiers were killed in the accident and the ceremony was attended by Cabinet members and top military brass. The victims' flag-draped coffins were then sent to their respective hometowns for funerals and burial.

Authorities identified the victims as Maj. Gen. Aydoğan Aydın, Staff Col. Gökhan Peker, Lt. Col. Songül Yakut, Maj. Koray Onay, Capt. Nuri Şener, Capt. Serhat Sığnak, Sgt. Maj. Mehmet Erdoğan and Specialist Sgt. Zeki Koç. They were returning to their military base after inspecting units in the area when their helicopter hit power lines shortly after take-off from a base in Şırnak's Şenoba district. All officers were deployed for counter terror operations in the area. Maj. Gen. Aydın was leading an counter terror operation to the Kato Mountains against the PKK terrorist organization. The region has been plagued with a campaign of violence by the PKK since the 1980s.

Media outlets identified the helicopter as an AS532 Cougar and the accident is the third involving a Cougar helicopter in the last 20 years. A total of 15 soldiers were killed in crashes in 1997 and 2003. The multipurpose helicopter has been used by the Turkish military for 21 years.

Reports say the helicopter was only two kilometers away from the base it took off from when it crashed and ammunition loaded on it exploded in the crash, leading to the immediate deaths of those aboard.

An investigation is underway to find out the details of the accident. Security experts say military helicopters in the region have been forced to fly low due to the threat of rocket attacks. Eyewitnesses said they first heard a loud explosion and then saw the flames when the helicopter crashed in a rural area. "I saw the helicopter burning and heard the sound of bullets exploding. We couldn't get closer," Ali Belek, a local who was among the first people to arrive at the scene in the aftermath of the crash, told the Doğan News Agency. 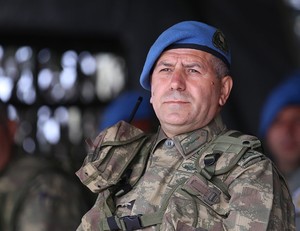 Maj. Gen. Aydın, the commander of the 23rd Gendarmerie Border Division Command in Şırnak, was the highest ranking soldier killed in the crash.

After graduating from the Turkish Military Academy in 1987, Aydın was assigned to critical operations throughout his career.

The commander took part in many operations in Northern Iraq against the PKK.

He was promoted to major general after the July 15 coup attempt last year and undertook his final mission in the Kato, Şırnak and İncebel Mountains beginning on April 19, 2017.

During a career that took him from a NATO mission in Germany to a commando brigade in the mountains of Turkey's terrorism-hit southeast, Aydın also commanded troops in cross-border operations against the PKK in northern Iraq. He was credited with leading troops under his command to safety when his military unit was surrounded by the PKK members in Northern Iraq in 1998.

Before the mission in Şırnak, he was the commander of a commando brigade in the central Anatolian city of Kayseri and he often took his troops to the southeast for counter terrorism operations there at a time of heightened terrorism risks. The PKK killed hundreds of soldiers, police officers and civilians since it declared the end to a ceasefire with the Turkish state in 2015. Aydın was among the commanders credited with eliminating the PKK presence in the region after the terrorist group's violent return in 2015. One of his last videos shows Aydın speaking on the phone with President Recep Tayyip Erdoğan, briefing the president about counter terrorism operations. Public sympathy has outpoured on social media. 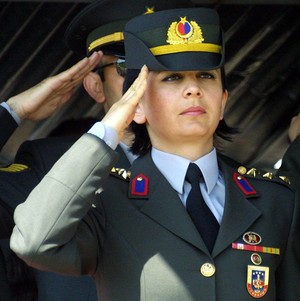 Lt. Col. Songül Yakut was among the officers killed in the helicopter crash in Şırnak. Yakut was one of the symbols of change in a male-dominated army, which had almost no media access until the recent years.

She first surprised the public by appearing in uniform on TV to speak about the gendarmerie forces' efforts against domestic violence in her capacity as commander of a newly established domestic violence unit a few years ago. This unprecedented move was just another milestone for the 41-year-old officer who became the first female gendarmerie commander in the army's history to be appointed to a district garrison when she was stationed in the capital Ankara's Beypazarı district.

Condolences poured in for Yakut, who was serving as head of an operations center in a military base in Şırnak when she was killed.

Born to a poor family in the eastern city of Malatya, Yakut lost her father at the age of eight. Dreaming of a military career, she joined the gendarmerie after graduating from military school in 1997. She was 28 years old when she was appointed as the commander of the Beypazarı gendarmerie base. She was then assigned to the domestic violence unit. In 2013, she was among the hundreds who fell victim to a defamation campaign by the Gülenist Terror Group (FETÖ) and was suspended from duty during the notorious Sledgehammer (Balyoz) case. It would later be revealed that the military officers accused of planning a coup attempt, nicknamed "Sledgehammer," were actually victims of FETÖ, which, through its infiltrators in the police and judiciary, staged sham trials to imprison officers. After a lengthy legal battle, Yakut was acquitted and promoted to the rank of lieutenant colonel. "I told her to retire, but she didn't listen to me," said Şule Nazlıoğlu Erol, Yakut's lawyer when she was implicated in the Sledgehammer case. "She told me she loved her job very much and would not care wherever she would be assigned," Erol told Anadolu Agency (AA).

"After she was acquitted, she was appointed to the southeast. I told her not to go and warned they [FETÖ] would not let her get away with it and retaliate. She was determined to go," Erol recalled.