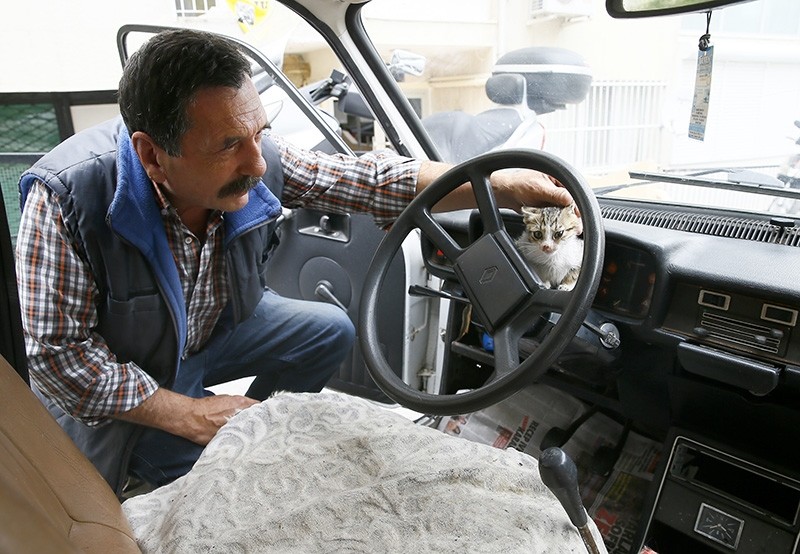 Taxi driver Tahir Çeven has taken his love for cats to the next level by buying a second car as a home for sick street cats and kittens.

The 54-year-old taxi driver looks after dozens of street cats in the 1977 model car, which serves as a safe place for them to eat, sleep, and recover from illnesses.

Çeven, who has two children of his own, was inspired to make a cat shelter after watching a documentary 15 years ago.

Regardless of the season or weather, Çeven and his wife get up before he starts his taxi shift to prepare food for up to 50 cats that depend on them for support.

Çeven, who people in the neighborhood know as "the friend of cats", bought the 1977 model car four years ago to turn it into a home and hospital.

Though he has cared for hundreds of cats in the four years since buying the car, Çeven still names each of the cats while he helps them back to health with food and medicine. He never allows a one-month-old kitten that he calls Bircan to leave his sight as it has lost its eyesight.

Saying that caring for the cats is good for his psychological health, the taxi driver told a reporter from Anadolu Agency, "When we go out on the weekend we take the cats with us too. In the near future I'm thinking of buying a minibus."

Çeven often brings cats to the car after they have had necessary operations, using it as a recovery room.

The neighbors and most of all, his wife, were very surprised when he bought a car just for the cats, said Çeven, but later on everyone got used to the situation.

Explaining that he goes to the market every week to buy food for the cats, Çeven said, "I give some of them names and called them like that when I go over to them. The cats' daily costs are 10 Turkish liras and God provides for them as well."