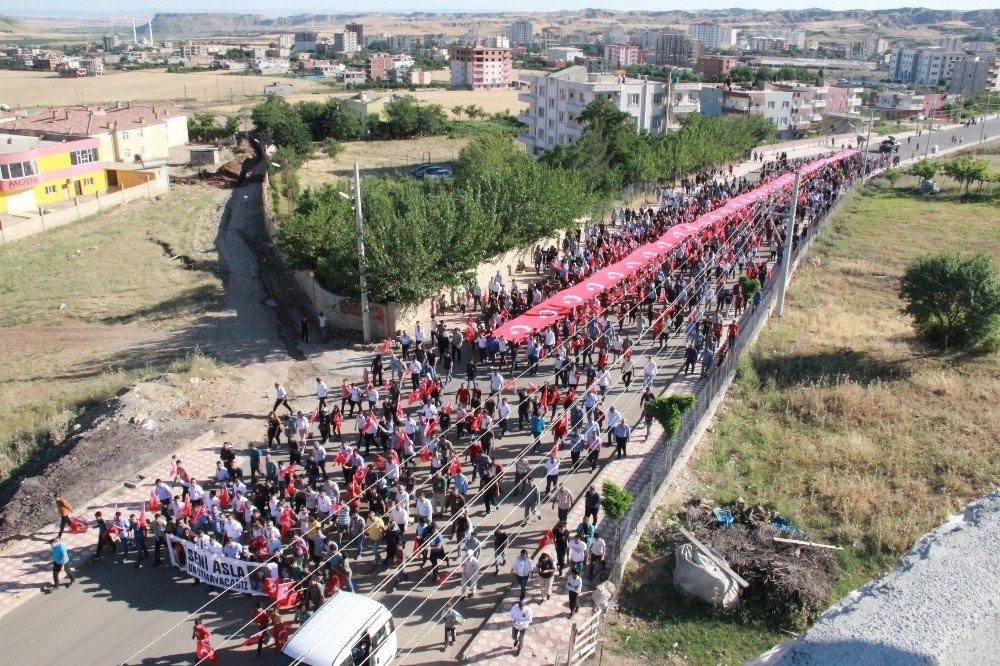 Hundreds of demonstrators rallied against the PKK on Monday in eastern Batman province, where Aybüke Yalçın, a 22-year-old music teacher was killed last week by the terror group, causing grief across the country.

Carrying a 200-meter-long Turkish flag, the protesters rallied to a high school building that was recently renamed as the Aybüke Yalçın Anatolian High School in Batman's Kozluk district.

Yalçın was traveling in a car with her colleagues in southeastern Batman province during the PKK attack. The car was hit by stray bullets as terrorists fired upon a nearby car belonging to a local mayor in the province's Kozluk district. Three others were also wounded in the attack.

Speaking at the demonstration, district governor Orhan Aktürk said the young woman will not be forgotten and that explaining the tragedy was impossible.

Yalçın, who was first transferred to Kozluk, Batman in October last year, was a popular teacher, known for her singing of traditional Turkish ballads.

The principal of the school, Mahmut Işık, said, when Yalçın first arrived at the school, there was no music room. "She bought the school's music instruments herself. We are devastated after losing such a talented and selfless educator."

One of her students, Dilek Avcı, said Yalçın personally attended to all their needs. "In the short time she was here, she taught us a lot. She not only taught music, but also acted as a mentor for many of us, listening to our problems, helping with our studies."

Another student, Firdevs Akın, said Yalçın was an exemplary teacher and the students were very upset for having lost her.

A day before she was killed, Yalçın sent a WhatsApp message to a friend of hers in Çorum. In her message, Yalçın said, "I'm scared of being so far from my family. What will I do if something happens to them? What will they do if anything happened to me?"