35 aftershocks recorded in Aegean Sea over 12 hours after quake 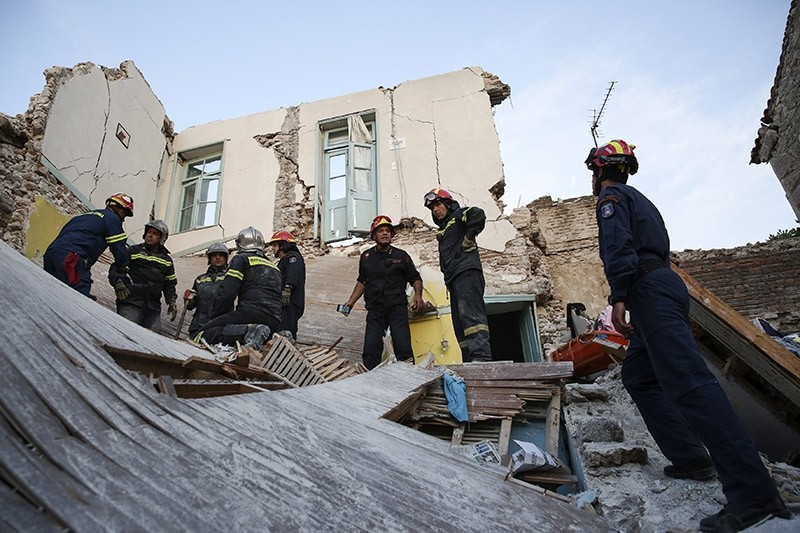 AFAD experts stated that seismic activities have continued since Monday 3:31 PM local time. The largest aftershock had a magnitude of 4.9, while six others also measured in at over magnitude 4.0.

A magnitude 6.3 earthquake, which lasted for approximately one minute, rattled Turkey's western coastal cities as well Istanbul and Bursa provinces to the north.

AFAD announced that the epicenter of the earthquake was located off the coast of western Izmir's Karaburun district, while authorities confirmed that there were no casualties in Turkey.

The earthquake also hit the nearby Greek island of Lesbos, where a 43-year-old woman was killed and 15 other people were injured.

The tremor mainly struck the village of Vrisa in southern Lesbos, leading to the destruction of "70 to 80 percent of the homes," police minister Nikos Toskas told state radio ANA.

The earthquake comes about two weeks after a 5.1 magnitude quake hit Manisa, a province east of Izmir. No casualties were reported, but the relatively higher magnitude earthquakes in the region of late have sparked concerns.

Turkey is among the world's most seismically active countries as it is situated on several active fault lines, with the most potentially devastating one being the Northern Anatolia Fault (NAF), the meeting point of the Anatolian and Eurasian tectonic plates.

The NAF, a strike-slip fault formed as the Anatolian plate was being pushed northwestwards by the Arabian plate, has produced devastating earthquakes throughout history, with the most recent ones being magnitude 7.4 and 7.2 earthquakes in northwestern Izmit and Düzce provinces in August and December 1999.

The 1999 earthquakes killed thousands in Kocaeli, Adapazarı, Istanbul, Yalova and nearby towns in the northwest, which serve as Turkey's economic and industrial heartland.

Turkey's most recent earthquake-related disaster took place in October 2011 in the eastern province of Van after a 7.2 magnitude quake and its powerful aftershocks lead to the destruction of thousands of buildings and the death of over 600 people.