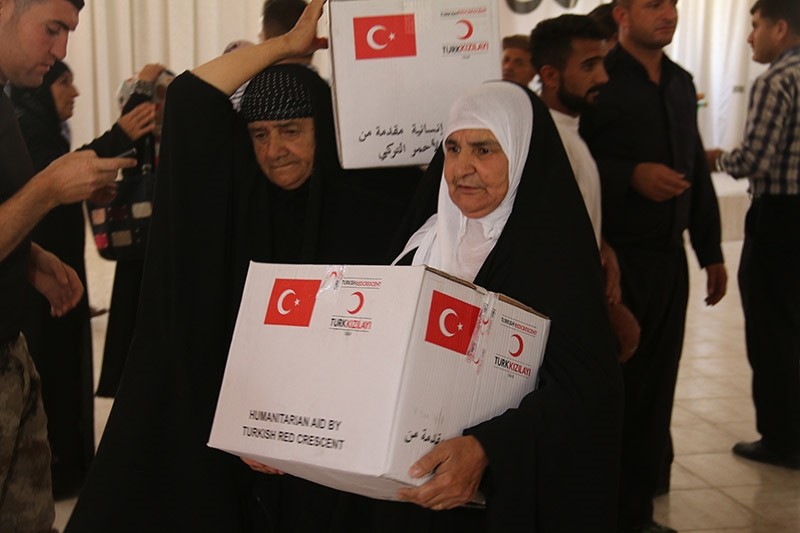 The Turkish Kızılay (Red Crescent) is continuing its humanitarian aid operations throughout the month of Ramadan, bringing supplies to people in need in the Iraqi city of Kirkuk.

Members of the organization spent the day distributing food to displaced people and disadvantaged families in the Altun Kupri district of the city.

Turkish Erbil Consul-General Mehmet Akif İnam told Anadolu Agency, "Turkey was the first country to send aid to Iraq when the Daesh crisis broke out. From that day forward the Turkish Red Crescent, the Disaster and Emergency Management Authority (AFAD), the Turkish Cooperation and Coordination Agency Directorate (TİKA) and all of our councils and organizations have been standing beside the people of the region."

In a region where ethnic and religious fault lines are tense, İman stressed that the Red Crescent's aid activities are carried out without reference to religion, language or sect.

"We don't pay attention to Arab, Kurdish, Turkmen, Muslim or Christian when we are distributing aid. There were our Turkmen brothers from Telafer here, our Arab brothers from Havice, and our Kurdish brothers from Altun Kupri among those in need," İman explained.

Wishing an end to the hardships created by terror groups in the region, İnam added, "We hope that these sorts of difficulties, especially the ones produced by Daesh, end as soon as possible and our displaced brothers can return to their homes once again. Until that happens Turkey will do what it can to help them."

Turkish Red Crescent Iraq Delegation President Serdar Yılmaz added that the organization has increased its activity during Ramadan, with food parcels being distributed to 135 families in need in the Altun Kupri area. Each parcel contains enough aid to meet each family's monthly needs, he added.