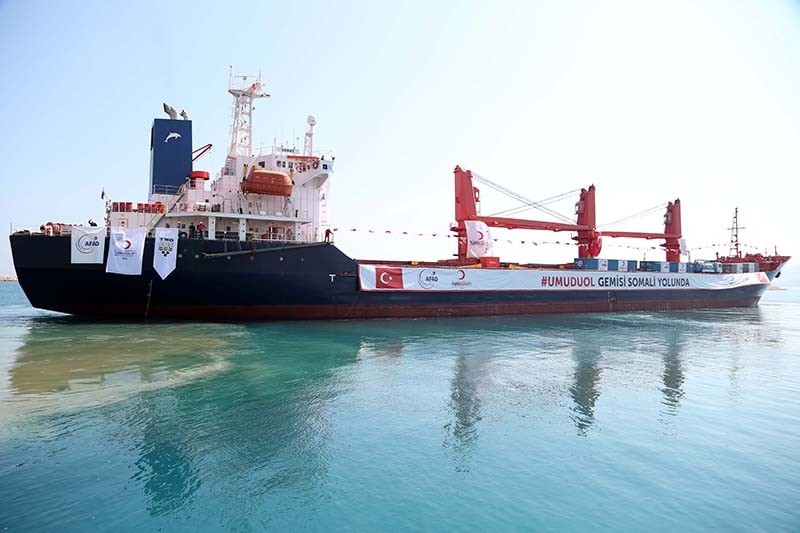 An aid ship belonging to the Turkish Red Crescent aid organization, Kızılay has arrived in the Somali capital Mogadishu with 13,000 tons of aid to be distributed across the country.

The "Sebat" ship is part of a Kızılay campaign started by President Recep Tayyip Erdoğan to relieve the risk of famine in East Africa and Yemen, where humanitarian crisis is looming.

The ship left the Turkish port of Mersin on June 4 for Mogadishu, arriving 11 days later on June 15.

Kızılay stated that the 13,000 tons of aid will be unloaded on June 17, after which they will be distributed to the needy.

The aid supplies were collected and donated by Kızılay, the Disaster and Emergency Management Authority (AFAD), the Turkish Cooperation and Coordination Agency (TİKA) and civil society organizations.

Supplies include sugar, flour and other necessities, sufficient to feed 3 million people for one month. The ship is also carrying medicines, medical supplies, a diagnostic laboratory and construction equipment.

The supplies will be distributed throughout Somalia, with a focus on the areas that have been stricken by drought.

Aid agencies report that up to 6 million Somalis are in need of aid, as some areas of the country have not seen rain in two years. Hundreds have died of cholera, a disease that the World Health Organization (WHO) estimates will affect 50,000 people in Somalia this summer. Thirteen of Somalia's 18 regions have been touched by the disease. At the same time around 500,000 Somalis have been internally displaced by the drought.

The head of Red Crescent relief organization Kerem Kınık stated that this was the 12th Kızılay ship to have reached Somalia so far. A further two ships have been prepared, with the next one going to Yemen.