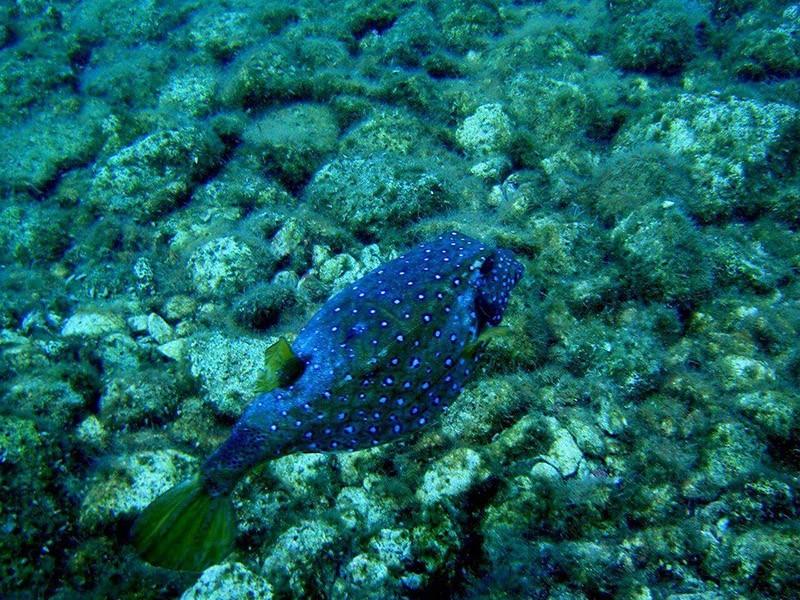 A tropical fish known as the yellow boxfish was spotted for the first time by a diver in Turkey's southern Antalya province, raising questions over global warming's effects on the marine ecosystem.

Diver Yakup Koç reportedly saw the fish in Üç Adalar, a series of small islands that hosts Turkey's first diving center and is a popular spot for underwater photographers.

Realizing that the fish had not been seen before, Koç showed his photographs of the fish to marine life expert Dr. Mehmet Gökoğlu of Akdeniz University, who confirmed that there was no native species of that kind in Antalya.

The yellow boxfish, whose scientific name is Ostracion cubicus, has a normal range from the Persian Gulf to the Red Sea, East Africa, Hawaii, and the Ryukyu Islands south of Japan. It lives in groups of single males and up to four females, typically inhabiting reefs and lagoons.

Although it is not possible to identify exactly where the fish came from, it must have traveled around 1,000 kilometers from its closest habitat to Antalya.

The yellow boxfish is the 60th species to reach Turkey from the Red Sea, causing scientists to conclude that the Mediterranean is taking on a tropical character due to climate change.

Stating that he was excited about the sighting, Gökoğlu stated, "A scientist at Lebanon's American University of Beirut had said that this fish was spotted in his country. After its appearance in Antalya this fish has now been seen twice in the Mediterrane-an."

Gökoğlu explained that the fish can grow up to 45 centimeters, adding, "It looks like a puffer fish. It has spiny structures and features that resemble a honeycomb. The young specimens are yellow, and the older ones have a blueish color. The one pictured by the diver is an adult, so that's why it's blue."

While the fish's skin is coated in a poisonous toxin, it presents no threat to humans. However, Gökoğlu warned potential fishermen that it is not suitable for eating.