Turkey ranks second in the world for humanitarian aid, named most generous donor 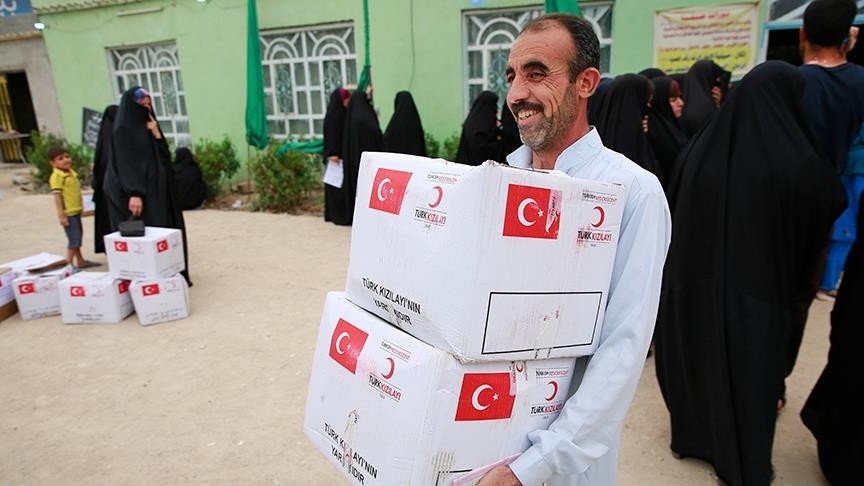 Turkey has once again topped the list of most generous countries in regards to humanitarian support as per percentage to their gross national income, according to a recent report published by the U.K.-based Development Initiatives.

The report, titled Global Humanitarian Assistance report 2017, said Turkey spent close to $6 billion on humanitarian aid in 2016, coming only second after the U.S., which spent $6.3 billion.

Turkey, however, was listed as the most generous country for spending 0.75 percent of its gross national income (GNI) on humanitarian causes.

Turkey increased its humanitarian aid budget from $3.2 billion in 2014 to reach $6 billion the following year. From 2013 to 2016, Turkey maintained third or second place in the list of the world's most generous countries.

The U.K., EU institutions, and Germany all followed Turkey in the list of major donor countries.

The total amount of aid given internationally rose from $25.7 billion in 2015 to $27.3 billion in 2016, with Turkey's aid making up around one-fifth of the total in 2016. Syria has been the most receiving country, with $2.14 billion, followed by Yemen and Jordan.

Meanwhile, the head of the EU delegation to Turkey praised Turkey on Tuesday for caring for millions of Syrian refugees during a concert to commemorate World Refugee Day.

"Both the Turkish government and Turkish citizens did a good job in hosting the Syrian refugees," Christian Berger said at the Modern Arts Center. "It is an extra burden and a great effort to host the highest number of refugees."

Representatives from several diplomatic missions gathered at the concert organized by the Research Center on Asylum and Migration (IGAM) with the support of Turkey's EU delegation, including Deputy Chief of Mission at the U.S. Embassy in Ankara Philip Kosnett.

"It is an honor for me to pass on my gratitude on behalf of the United States to Turkey for opening your doors to refugees. We applaud the hosting countries that give vital contributions and their generosity," Kosnett said.

IGAM President Metin Çorabatır said the Syria issue would not be solved in the short-term.

"We should find ways to live with over 3 million refugees together in Turkey," he said.

The concert was performed by Syrian children who sang songs in Turkish, Arabic and English.

Turkey has the largest refugee population in the world and is currently home to more than 3 million Syrians, according to official data. It has spent around $25 billion to provide for those who have fled within its borders, while the international community contributed $526 million to that amount.

That figure accounts for approximately 45 percent of all Syrian refugees in the region, the U.N. says.

An additional 300,000 refugees in the region are mostly from Iraq, Afghanistan, Iran and Somalia.