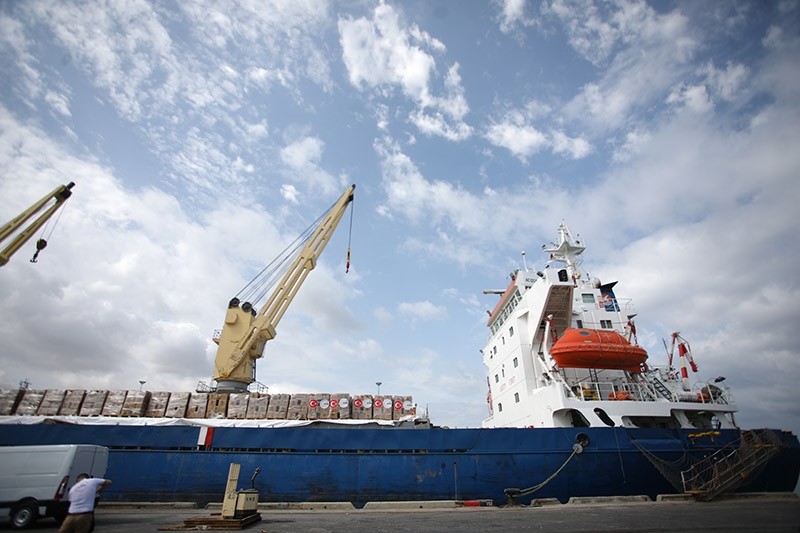 A Turkish aid ship carrying 10,000 tons of humanitarian aid arrived in Israel, its final destination before delivery of aid to Palestinians in the Gaza Strip. Turkish officials meanwhile say the aid efforts will continue in the future

The ship is carrying 50,000 food packages, 5,000 tons of flour and 100 tons of biscuits, chocolates and cakes. The vessel is also carrying 50,000 items of clothing, 18,100 toys, 32,000 sets of stationery and over 1,000 bicycles as presents for Eid al-Fitr (the Muslim holiday marking the end of the fasting month of Ramadan) for Palestinian children in the coastal enclave. The aid ship was dispatched by the state-run Disaster and Emergency Management Authority (AFAD) and made an approximately 40-hour journey before docking at the Ashdod port, north of Gaza.

The Turkish ambassador to Israel, Kemal Ökem, AFAD official Cengiz Akın and other diplomats who were present at the port to welcome the ship.

"In line with instructions from President Recep Tayyip Erdoğan last year, we made our Gazan brothers and sisters happy [with the aid ship] before Eid al-Fitr," Akın told Anadolu Agency (AA). "We are here again in Ashdod port, and we will begin to distribute these supplies tomorrow (Thursday) morning," he said.

Ambassador Kemal Ökem said Turkey's aid to Gaza will continue and that they were closely cooperating with local authorities in bringing the aid to Gaza. Ökem said Turkey was behind a series of projects to support Palestinians, including projects by the Turkish Cooperation and Coordination Agency (TİKA), as well as an initiative by the Energy Ministry to resolve the electricity crisis in Gaza. "We will do our best to address the problems in Gaza," Ökem told AA.

Since 2007, the Gaza Strip has suffered a joint Israeli-Egyptian blockade that has deprived the enclave's roughly 1.9 million inhabitants of their most basic needs, especially food, fuel, medicine and construction supplies. The Gaza Strip largely depends on foreign aid as the economy has stalled under the Israeli blockade, and apart from small industries, industrialization is almost nonexistent.

Apart from food packages, clothing and medical equipment, Turkey also offers more permanent solutions to Palestinians' problems, such as building hospitals and setting up olive oil plants for farmers. A hospital built by Turkish development aid agency TİKA, which will be one of the biggest in the region, is scheduled to open later this year in the Gaza Strip, where hundreds were injured in the 2014 Israeli airstrikes. The aid agency also seeks to accommodate Palestinians who lost their homes in the Israeli airstrikes. A total of 320 apartment flats under construction, which will cost some $13 million, will be handed over to families soon. Housing units are being built in an area of 20,000 square meters in a Gaza village.

On Tuesday, the Turkish Red Crescent delivered food aid to 15,000 households in the Gaza Strip. Red Crescent head Kerem Kınık, who was in the Gaza Strip for aid delivery, told AA that they were also delivering cash aid to needy families, noting that they pay the rent for families whose houses were damaged in Israel's 2014 attacks in eastern Gaza's Shujaiyya neighborhood. Kınık said they were building the "largest" aid storage area in Gaza and is scheduled to open next year.

In a recent statement, the Turkish Foreign Ministry said that the country decided to donate $10 million to the general budget of the Palestinian Authority.

"Turkey strongly supports the efforts to improve the humanitarian conditions of the Palestinian people and the process of building Palestine's state capacity," the ministry said in a statement released on June 19. "Turkey, having financed in 2016 $5 million dollars worth of fuel supply to Gaza where the chronic electricity crisis made the humanitarian situation on the ground much more serious, is currently working on installing solar panels to contribute to the mid- to long-term solution of the problem. Turkey also decided to contribute half a million U.S dollars in financial contributions to the U.N Humanitarian Fund for Palestine. Turkey realized $138.3 million dollars of aid to Palestine by the end of 2016 out of its project-based total pledge of $200 million dollars made at the Conference on the Reconstruction of Gaza and Palestine held in Cairo in 2014 for the years 2014-2017," the statement by the ministry said.