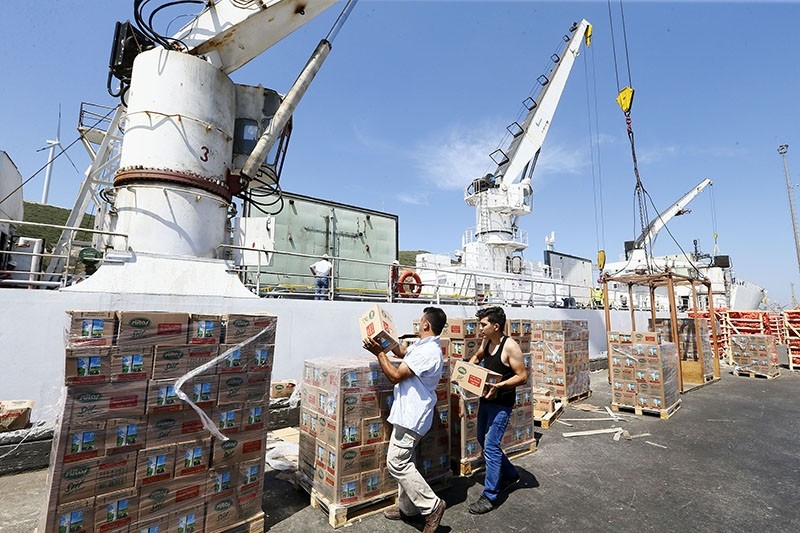 A ship carrying 4,000 tons of food for beleaguered Qatar left Turkey early on Thursday, marking a change in how essential supplies are being sent to the tiny Gulf state.

The ship left the Aegean port of Aliağa in Izmir province with around 4,000 tons of fruit, vegetables and other foodstuffs on board, the Anadolu news agency said. It should arrive in 10 days.

Qatar, a small peninsular Gulf state, cannot maintain food supplies across its now-closed land border with Saudi Arabia because of the "embargo crisis", the chief executive of the logistics company behind the shipment told Anadolu Agency.

Ipek Demirci said a sea route had been opened because air transport was insufficient to meet the needs of the Qatari population.

She also said her firm was preparing to send a second ship in the coming days.

Saudi Arabia, the U.A.E. and Bahrain also closed their airspace to Qatari aircraft, and gave Qatari diplomats 48 hours to leave their respective countries.

Other countries to have recently cut diplomatic ties with Qatar include the Maldives and the Comoros Islands, along with Libya's Tobruk-based government, which supports putschist general Khalifa Haftar and lacks international recognition.

Qatar denies all accusations that it is a supporter of terrorism, describing moves to isolate it by its fellow Arab countries as "unjustified".

The crisis has put Turkey in a delicate position as Ankara regards Qatar as its chief ally in the Gulf but is also keen to maintain its improving relations with the key regional power Saudi Arabia.

Ankara has stopped short of directly criticizing Saudi Arabia's actions, merely calling on Riyadh to take a lead role in solving the crisis.

In a sign of the importance of the relations with Riyadh, Erdoğan late Wednesday held phone talks with Saudi King Salman after the sudden appointment of his son Mohammed bin Salman as crown prince in place of Mohammed bin Nayef.

Erdoğan also spoke with Mohammed bin Salman himself and passed on his congratulations over the move, Anadolu said.

Both sides expressed a commitment to further strengthen relations between Ankara and Riyadh and to "step up efforts" to end the tensions concerning Qatar, it added.

Relations between Saudi Arabia and Turkey had been been damaged by Riyadh's role in the 2013 ousting of Egyptian president Mohammed Morsi, a close ally of Ankara.

But ties thawed considerably after the accession of Salman to the throne in 2015, with the king warmly welcomed on visits to Turkey.