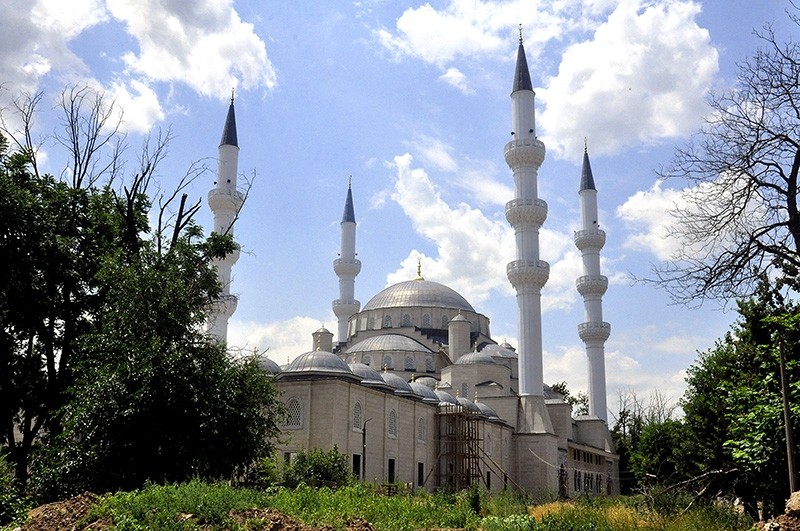 A Turkish foundation has finished construction on the largest mosque in Central Asia, located in the Kyrgyz capital Bishkek.

The mosque bears traces of Ottoman architecture, with a design similar to Ankara's Kocatepe Mosque, which was completed in 1987.

While locally designed mosques in Bishkek tend to have a single dome and thick minarets, the Turkish-designed mosque has many smaller domes around the main dome, and elegant minarets of the kind seen in Ottoman mosques.

The mosque in the Kyrgyz capital is built on a plot of around 35 decares, with the mosque itself covering 7,500 square meters.

Greeting worshippers as they enter is a main dome with an interior circumference of 23 meters, reaching a height of 37 meters from the floor.

The mosque's minarets each have four balconies and are 70 meters in height.

Taking the mosque's covered areas and garden as a whole, up to 20,000 people can worship there at the same time.

As part of the social facilities, there is a conference hall, Quran courses, an ablutions fountain, and a car park with room enough for 500 vehicles.

While the mosque's designs were drawn by Turkish architects, around 70 percent of the workers were employed locally, adding a boost to the Bishkek economy.

The TDV has built over 3,000 mosques and educational facilities in Turkey, plus over 100 mosques across 25 countries since it was established in 1975.