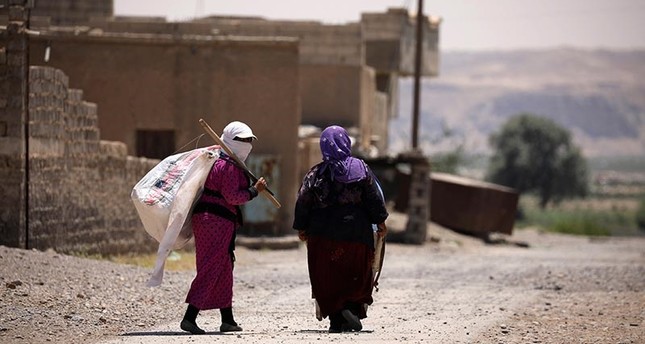 As many as 100,000 civilians are trapped in Syria's Raqqa, as the battle to retake the city from the Daesh terrorist group continues, the U.N. rights chief warned Wednesday.

"The intense bombardment of Al-Raqqa over the past three weeks has reportedly left civilians terrified and confused about where they can seek refuge," Zeid Ra'ad Al Hussein said in a statement, cautioning that "up to 100,000 civilians are effectively trapped as the air and ground offensive intensifies."

Fighting has been fierce but residents like Ahmad Shaabu have been stopped from leaving by Daesh, which has been accused of using civilians as human shields.

"We couldn't get out... They wouldn't let us," Shaabu, 35, told AFP in Jazra, a western suburb of Raqqa, after finally escaping on Tuesday.

Holding his small daughter in his arms, Shaabu described how his family and other residents were trapped in the western Raqqa neighbourhood of Al-Daraiya.

"If we stepped outside we were targeted by snipers. They shot at me once when me and friends went out to fetch water," he said.

The families had gathered supplies but were running low and still had to risk leaving their homes, especially to get water.

The streets were quiet on Tuesday and some of the smaller children -- free to roam without fear of being targeting by the terrorists -- were out.

Share on Facebook Share on Twitter
Previous in Turkey A wooden mosque in Turkey's northern Samsun province is still in use... Next in Turkey Photographs shared on social media of the ancient Aegean city of Ephesus,...
DAILY SABAH RECOMMENDS