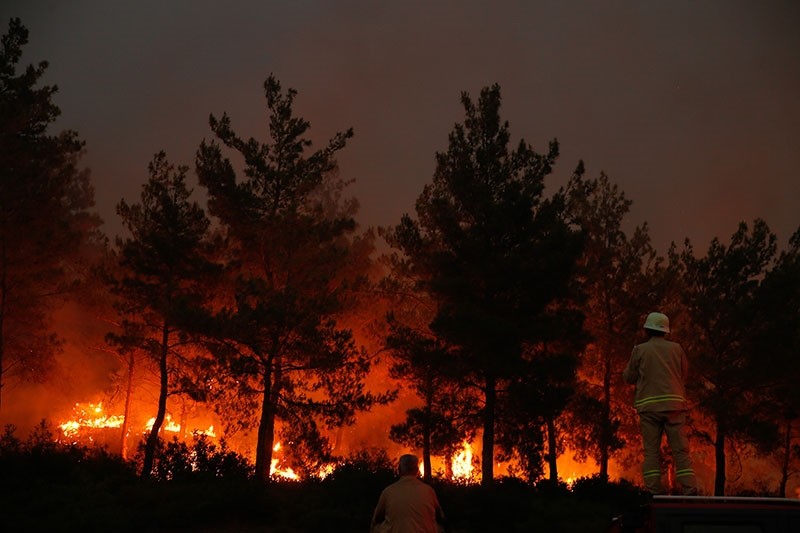 Amid a heat wave that has affected the whole country, a forest fire that broke out near Turkey's third largest city Izmir has entered its second day, threatening the water flow of the city and its surrounding districts due to the damage it caused in power lines leading to a dam that serves as the city's main water supply.

Speaking to reporters in Izmir, Ismail Üzmez, head of the General Directorate of Forestry, said almost all of Turkey's forest firefighting force was dispatched to the Menderes district of Izmir, where the fire has burned 500 hectares of forest land and scrubs so far.

"Currently there are nine helicopters, four large firefighter planes, 128 sprinklers aside from those of the Izmir Metropolitan Municipality and thousands of personnel are fighting the fire. We are trying to contain the fire, and the changing directions of the wind is causing us trouble. This is not a city fire; it spread 6-7 kilometers in just four hours. We cannot conduct night flights," Üzmez said.

Meanwhile, a firefighting helicopter crashed into the nearby Tahtalı Dam while trying to fill up its water bucket. Authorities said that the bucket got caught on an object inside the water, and the helicopter's engine failed while the crew was trying to free the bucket. As the helicopter was very close to the water, all five crew members suffered only from minor injuries as a result of the impact, and managed to swim back to land.

Since the fire is raging near the dam that serves as the main water supply for Izmir's southern and southwestern districts, water flow to many districts and neighborhoods have been cut since power lines feeding the water pumps have been either damaged or shut down due to the threat posed by the fire. Power cuts have also affected the Menderes district center and the resort towns of Gümüldür and Özdere.

Amid a heat wave sweeping across the country, temperatures reached up to 41°C (105.8°F) in Izmir and more than 40°C in western Turkey. As the heat wave and dry weather has increased the risk of forest fires, people in urban areas have also been affected from power and water cuts while trying to cope with temperatures some 10 degrees above seasonal averages.

Although the exact cause of the fire remains unknown, Üzmez explained that 97 percent of forest fires are man-made disasters resulting from barbeques, cigarettes, or fires started by hunters or shepherds, dumpster or stubble fires.

"We say that absolutely no fires should be lit, no barbeques should be done in such weather. We have 776 observation towers for our forests. Here, we cannot prevent the [rapid spread of] fires despite intervening within 10 minutes," Üzmez said, urging people to report fires to the 177 Forest Fire emergency line.