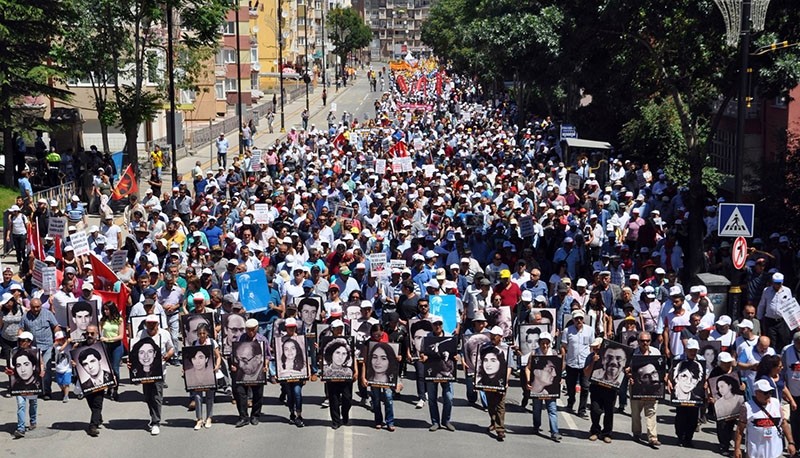 The Sivas massacre, an arson attack on the city's former Madımak Hotel that killed 37 people, mostly Alevi intellectuals and artists, was commemorated on its 24nd anniversary on Sunday.

The commemoration events started with local authorities, including Governor Davut Gül, Mayor Sami Aydın and Alevi Cem Foundation President Erdoğan Döner laying carnations in memory of the victims of the Madımak Hotel massacre, which was converted in to a provincial science and culture center years after the incident.

Gül said what had happened that day, 24 years ago, was an attack on the nation's unity, togetherness and brotherhood. "The entire nation was the victim of the attack. May God never allow something like this ever happen again. We, in this country of ours, need to live side by side. Nefarious forces may try to provoke us in the future. "

Döner said they were here to commemorate the victims of the shameful episode. "It is Sivas that needs to cleanse this shame. Pain lessens through sharing. We need to connect and draw useful lessons from such unfortunate events."

Following the official commemoration ceremony, some 10,000 people from Alevi foundations, political parties and NGOs marched to the former hotel building, where a ceremony was held.

Dozens of people - mostly Alevi Muslims - gathering for a cultural event were killed when a group of extremists set fire to the hotel where they were meeting. Two of the attackers also died in the blaze.

The victims had gathered to celebrate the life of famous poet Pir Sultan Abdal when angry protesters surrounded and attacked the hotel.