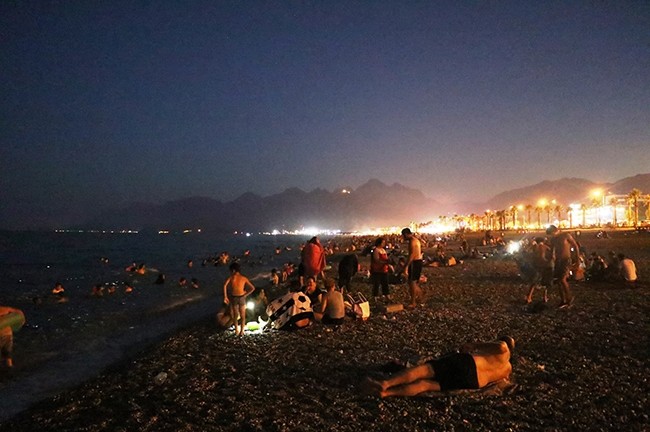 Thousands of people hit the beach after sundown in the southern Turkish city of Antalya as a new hot weather front arrived from North Africa that sent temperatures soaring to an 88-year record high of 45.4 degrees Celsius over the weekend.

Local meteorologists said that the temperature was 10-12 degrees above seasonal averages, adding that such temperatures were anything but normal and that the average July temperature for Antalya was 34 degrees Celsius.

During the day, residents and tourists deserted the streets and beaches of the city known as Turkey's tourism capital, choosing instead to find relief indoors from the punishing temperatures. After 7 p.m. local time, people started pouring into the Konyaaltı beach in the city center as the sun started to set and the heat eased.

Thousands, including families, spent their evening outside cooling off in the sea after a hot day. Some said that they had a hard time finding an empty spot at the beach despite it being an unusual hour.

"I wanted to come in the evening because I was afraid to get sunstroke if I came in the afternoon. Entering the sea in the evening is a different joy. Even though we had some trouble finding a place, I feel fortunate to be able to enjoy both the food and the sea," a visitor from Istanbul said.

The Turkish State Meteorological Service said that starting Monday a rainy weather system will pass over Turkey from the northwest and will be effective throughout the Marmara region as of Tuesday.