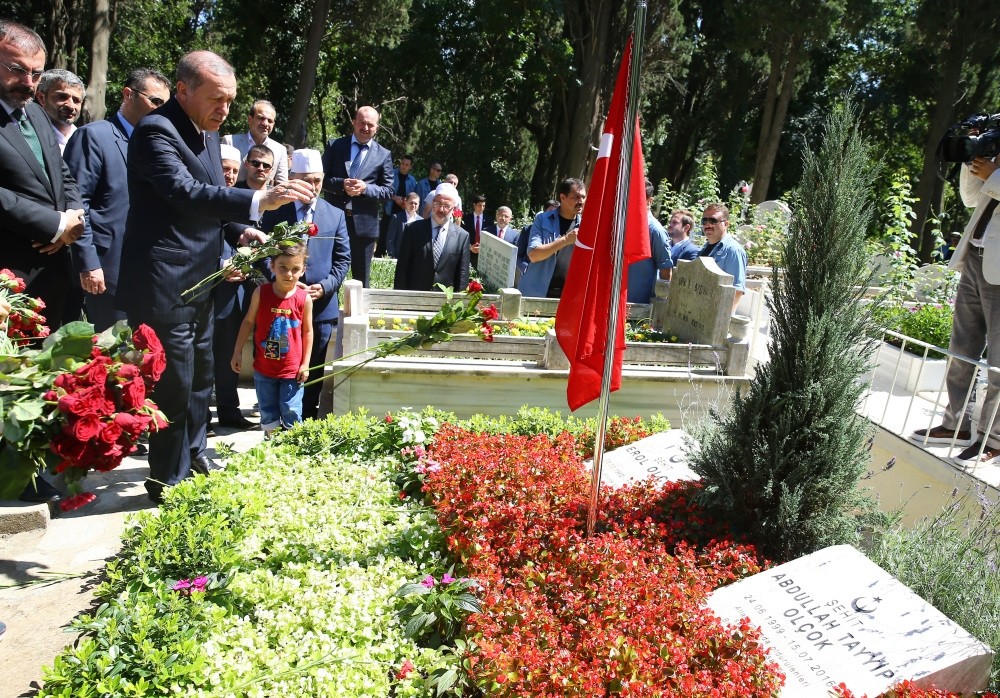 President Erdou011fan visits graves of his close friend Erol Olu00e7ok and his son Abdullah Tayyip who were killed by putschists while resisting them.
by Daily Sabah Jul 12, 2017 12:00 am

Nearly one year after 249 people were brutally murdered while resisting the coup attempt perpetrated by a military junta loyal to the Gülenist Terror Group (FETÖ), events to celebrate the lives of the victims have begun ahead of the first anniversary on July 15.

July 15 was designated as Democracy and National Unity Day after the deadly coup attempt last year, while both governmental and non-governmental organizations (NGOs) have announced that week-long events will be held to mark the day until the early-morning hours of July 16. Apart from the visits to local cemeteries, mosques in Turkey's 81 provinces across the country hosted events that included special prayer recitations for the fallen as well as photo exhibitions which opened yesterday, honoring the public resistance shown in response to the coup attempt and displaying the damage left behind by the putschists. 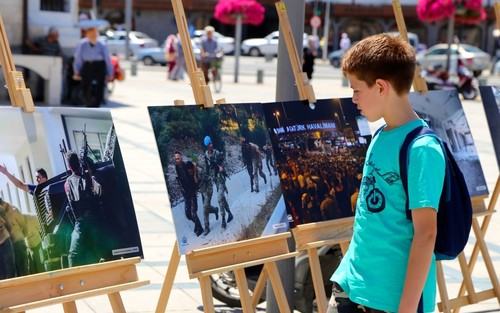 A boy looks at photos of the July 15 coup attempt in a photo exhibition in central city of Konya.

Several think-tanks including the Foundation for Political, Economic and Social Research (SETA) will host symposiums and conferences on the coup attempt and its aftermath. Books written on the subject will also be released. On July 13, a remembrance ceremony will be held at the Presidential Palace in Ankara with the participation of families of the victims, followed by a group prayer to be held at a mosque located inside the Presidential Palace complex on July 14.

The commemoration ceremonies will culminate with events attended by the president and other high-level officials on July 15. Turkey's Parliament, which faced bombardment during the putsch bid, will convene with a special agenda focused on honoring the anniversary. President Erdoğan will join hands with the families of victims as well as survivors in a march that will take place from the Asian side of Istanbul to the European side, across the July 15 Democracy and Martyrs' Bridge, the name given to the Bosporus Bridge in the wake of the coup attempt. The president is scheduled to give a public address after the march and unveil a new monument erected at the entrance of the bridge dedicated to "martyrs."

In Istanbul, the first sign that the coup was unfolding came in the images of soldiers taking over the Bosporus Bridge. A large crowd had poured onto the bridge despite a barrage of gunfire targeting anyone who approached. Erol Olçok, a close friend of Erdoğan, and his 16-year-old son Abdullah were among those killed on the bridge while confronting the putschists. The monument, situated at the Asian entrance of the bridge, is 9.5 meters tall and is covered with limestone. Five arches will be built on the five corners of the pentagon dome and the names of the 249 people who died in the coup attempt will be etched inside three arches.

A larger monument built across from the Presidential Palace in Ankara will also be unveiled on July 15 in memory of those killed while trying to stop the putschists as they opened fire on the presidential complex. President Erdoğan will also join the ceremony to unveil the monument past midnight.

At 12:13 a.m., salah prayers will be recited from minarets around the country. It was at that time on July 15, 2016, when this prayer, originally used to alert Muslims of funerals, echoed throughout the country. The state-run religious authority had urged its staff to recite it to signal an extraordinary situation on the night of the coup and it was accompanied by a message about the coup, urging the public to take to the streets on July 15.

Also on July 15, the "Democracy Watch" similar to the one held in Istanbul's Yenikapi district will be re-enacted and thousands are expected to take to the streets again in scenes reminiscent of the immediate aftermath of the coup attempt. Erdoğan, who escaped an assassination attempt on July 15, had made a video call over FaceTime on air in a national broadcast, urging the public to take to the streets to "reclaim democracy" that night. Erdoğan's call led millions across the country to flood the streets for massive rallies. For nearly one month, people rallied every night across the country before Erdoğan called for an end to the "Democracy Watch" in August 2016 during his address at the biggest such rally in Istanbul's Yenikapi district. This year's "Democracy Watch" rally is expected to last only hours rather than days.