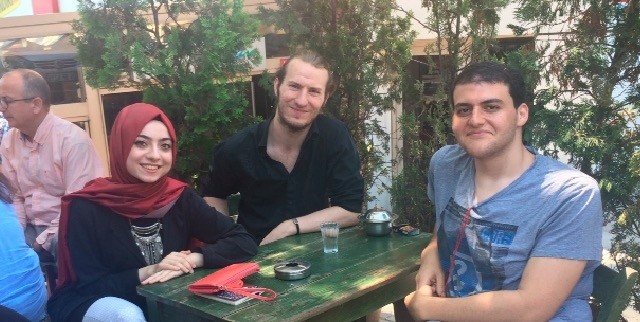 Regardless of their knowledge of Turkish politics, foreigners in Turkey tell how they were surprised on the night of July 15, adding that they were worried both for themselves and Turkey

Other than its damage to the country and the people, there is no doubt that the failed coup attempt of July 15 had a major influence on social memory and became one of the non-erasable incidents in the country's history. Still, everyone had their own unique experiences that night, including foreigners who were in Istanbul at the time who say they are glad the coup attempt failed.

Thomas Parker, who is originally from Texas, U.S., but was a graduate student at Boğaziçi University at the time of the coup attempt and still lives in Istanbul, described the night as scary, since he was alone in his home with only his two cats and was caught unawares when his friends texted him to let him know about what was happening. "They told me that there might be a terrorist attack, so bridges were closed. So, I couldn't understand what was happening. But then, I started to follow Turkish media," he said, adding that since he knows Turkish enough to understand Turkish TV channels, he managed to get information first-hand. "When my other foreign friends were saying that the coup was successful because they were reading the foreign media, I was able to correct them and told them what was really going on."

Explaining that he was already well-informed on Turkish politics, Parker said that he had not been expecting such an attempt and was totally shocked. "On the night of July 15, I worried for both myself and for Turkey," he added, indicating that regardless of what his opinions are on the government, it is very good that the coup was successful. Since he spent a year in Egypt, Parker is a no stranger to coups, although he left Egypt one month before the ouster of President Mohammed Morsi, "luckily," as he puts it. "Still, I managed to see some protests and observe what was going on in Egypt. So, I would not want Turkey to go through the same experiences."

Egypt was roiled by turmoil when the military deposed Morsi, the country's first freely elected president, in a 2013 coup.
Similar to Thomas, Mohamad Shalaby, who is from Egypt but has lived in Turkey for two years and studies at Bahçesehir University, said that he is quite familiar with the issue. Still, he also describes the night as "unexpected" and does not deny how shocked he was.
"On the night of the coup, my friends called me to play laser tag. When I reached them, they told me that there was a coup. I was shocked since I was on the road and was not aware of anything," Shalaby said, still expressing his surprise at how things can change that dramatically in just few hours.
Referring to the delicateness of those hours, Shalaby said that all his family and friends were so panicked that they all started to call at once. "There was a Syrian friend with us. He was the one who panicked first and the most since he thought that if something happens, it would affect them [refugees] first."

Unlike Parker, Shalaby was not interested in Turkish politics, which made everything even more complicated for him. "We decided to go to the house of the one who lived the nearest, which was in the Fatih neighborhood in Istanbul, but we could not get there due to the protests, which I did not even get at that time whether they were pro- or anti-coup. Then, we decided to go to the nearest hotel. At the hotel, we thought at first that we would be stuck there for days. Yet, the next morning, everywhere was very quiet, just like nothing happened, so we went back to our homes."
Calling everything a kind of deja vu, Shalaby, who does not speak Turkish, said that the Egypt media deceived them that night since it claimed the coup was successful. "I'm neither pro- nor anti-government in Turkey. But, since I'm from Egypt and I experienced the coup there, there is one thing that I'm sure of, which is the fact that I'm definitely anti-coup."
Despite their shock from the incident, both Parker and Shalaby said that they live and will continue to live in Istanbul, since things seem quiet right now.
"According to my father, Turkey is an ideal country to live in, since we are not culturally excluded and the infrastructure is very good. So, we will continue to live here," Shalaby said, while Parker described life in Turkey as "pretty good."