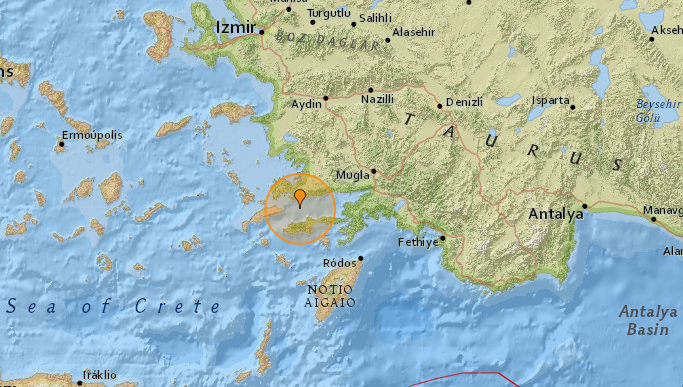 by Daily Sabah Jul 21, 2017 12:00 am
A magnitude 5.0 aftershock hit off the coast of Turkey's Datça peninsula hours after a magnitude 6.7 quake that struck the Aegean sea killed two people and injured nearly 500 in Greece and Turkey on Friday night.

The region was hit by approximately 40 more aftershocks ranging in strengths between 3.0 to 4.6 magnitudes after the main quake, however, the 5.0 quake confirmed by Turkey's Disaster and Emergency Management Authority's (AFAD) caused alarm over the possibility of a stronger quake.

At least 15 people were hospitalized in Datça district after yesterday's earthquake.

A powerful earthquake shook beach resorts in Greece and Turkey, killing two tourists who were crushed when a building collapsed on a bar in the Greek island of Kos, and injuring nearly 500 others across the Aegean Sea region.

Only a few miles apart, Kos and the Turkish resort of Bodrum were hit hours before dawn by the shallow undersea quake that caused a two-foot (0.6-meter) sea swell and havoc among residents and thousands of vacationers at bars and restaurants.

The U.S. Geological survey measured the quake as being of magnitude 6.7, with Greek and Turkish estimates a fraction lower.

Kos resident Vassilis Megas said the earthquake was "shocking, terrifying ... The whole house shook back and forth. People ran out into streets. We did too, and stayed out all night."