Hundreds condemn the PKK murder of teacher in Tunceli march 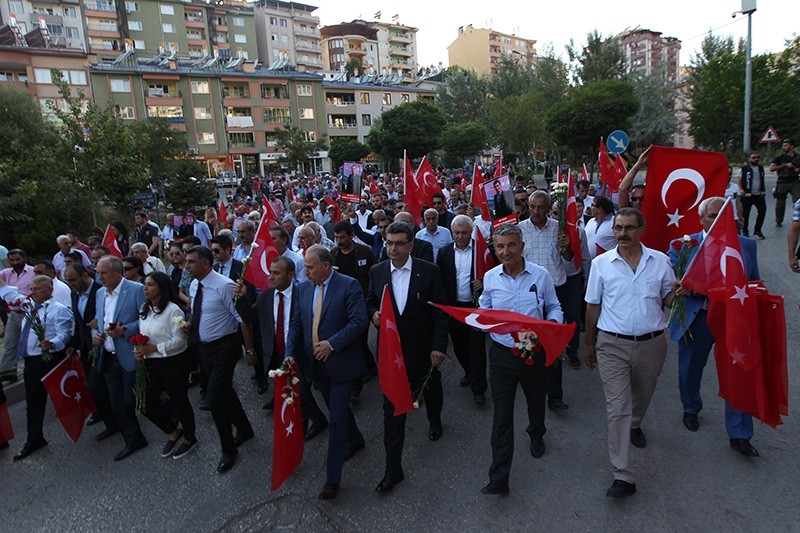 Hundreds of people, joined by lawmakers, local administrators and NGO's, held a march Friday in Turkey's eastern city of Tunceli to condemn the brutal murder of a 23-year-old teacher by PKK terrorists.

On June 16, Necmettin Yılmaz was attacked, kidnapped and later killed by the PKK. He was traveling to Gümüşhane from Şanlıurfa where he was working as teacher. His charred car was later found in Pülümür Valley in Tunceli province.

His body was discovered near a creek in the valley last Wednesday, confirmed the Tunceli governor's office after a series of forensics tests in Istanbul. A funeral ceremony was held Sunday.

The murder drew reactions from all segments of the society, especially from the main opposition Republican People's Party (CHP), which has a traditionally strong voter base in the predominantly-Alevi Tunceli province.

A march has been organized by the CHP and Tunceli residents were invited to the march with loudspeakers on party bus with the slogans of "no more tears in these lands, tranquility, and peace." Participants carried Turkish flags, pictures of Yılmaz, clovers and banners condemning PKK terror.

A disabled boy attended the march with a Turkish flag on his battery-powered car. Governor Sonel brought the young man in front of the group to make sure he can keep up easily.

At the end of the one-kilometer march, the group threw clovers to Pülümür Stream, where the young teacher's body was found, and lit candles.

In a ceremony, Erol stated that the residents of Tunceli were deeply upset by the murder of Yılmaz, and offered his condolences to the teacher's family. "The bullet fired on teacher Necmettin is a bullet fired on Dersim's history, culture, customs and beliefs," Erol said, referring to the province with its Kurdish name.

Erol stated that the terrorists are putting the lives of 80 million citizens in danger and invited the public for resistance against these terror groups.

A speech by Erol in the parliament after the attack was widely acclaimed by the public, and President Recep Tayyip Erdoğan had called Erol to congratulate him on his speech in a rare political thaw between the president and the CHP.

Meanwhile on Saturday, pro-PKK Peoples' Democratic Party (HDP) co-chairman Selahattin Demirtaş, who was arrested on Nov. 2016 and faces multiple charges for membership to the PKK and aiding and abetting the terrorist group, condemned the murder of Yılmaz. "I condemn and curse teacher Necmettin's murder without hesitation. There can be no legitimate or moral cause for such an atrocity," Demirtaş said.