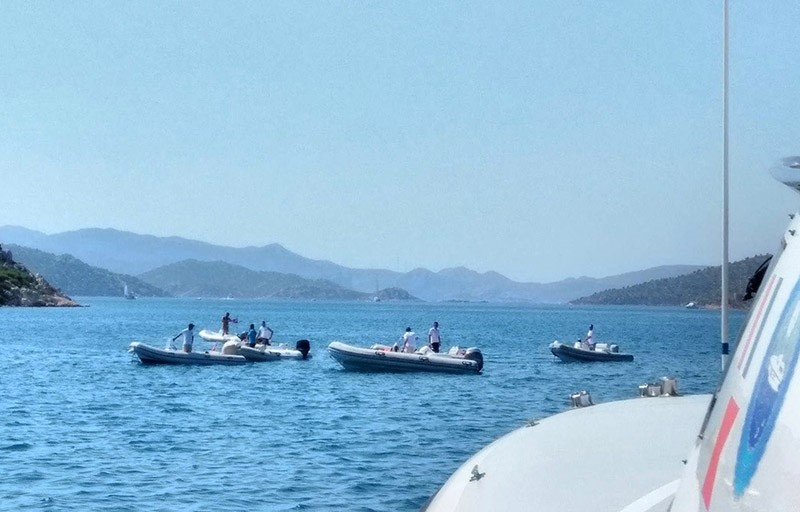 Eight people who were on the capsized boat named Anemone have been rescued, two of whom were injured. One person was found dead after the incident, while two others were missing.

Anemone sank 200 meters (220 yards) off the shore of Bozburun, a seaside town 30 kilometers (19 miles) southwest of the popular resort of Marmaris. Coast guard, gendarmerie and Disaster and Emergency Management Authority (AFAD) teams were dispatched to the region shortly after the incident.

The body of the owner of the 20-meter (66-foot) boat, identified as Ali Doğan Çayırlıoğlu, has been recovered, Esengül Civelek, the governor of Muğla province, said Wednesday. "The owner of the yacht's corpse was found and search and rescue operations are ongoing," he added.

The bodies of the missing passengers were also recovered late Wednesday.

Police detained the captain and a crew member of the boat, who said in their testimonies that the boat sank within minutes before they were able to understand what was going on.

Early evidence pointed that Çayırlıoğlu was steering the vessel when it started taking on water from its rear, probably due to an unclosed hatch.

Turkish media reports said that Çayırlıoğlu, who co-owns the boat with his business partners in Istanbul, had been going on a boat tour with his family and his staff every year. His accountant, Ayhan Ağdemir, was also on the boat along with his wife and two children. 15-year-old Mert Ali Ağdemir and 40-year-old Safia Ağdemir also died in the incident.

Previously, Marmaris District Governor Celalettin Yüksel said that the boat overturned after sailing 200 meters, but he noted that the details behind the accident has not yet been established.

"Our teams continue to work intensively" Yüksel said, adding that the search teams were able to recover the dead body Çayıroğlu and that search efforts for the missing people continue.