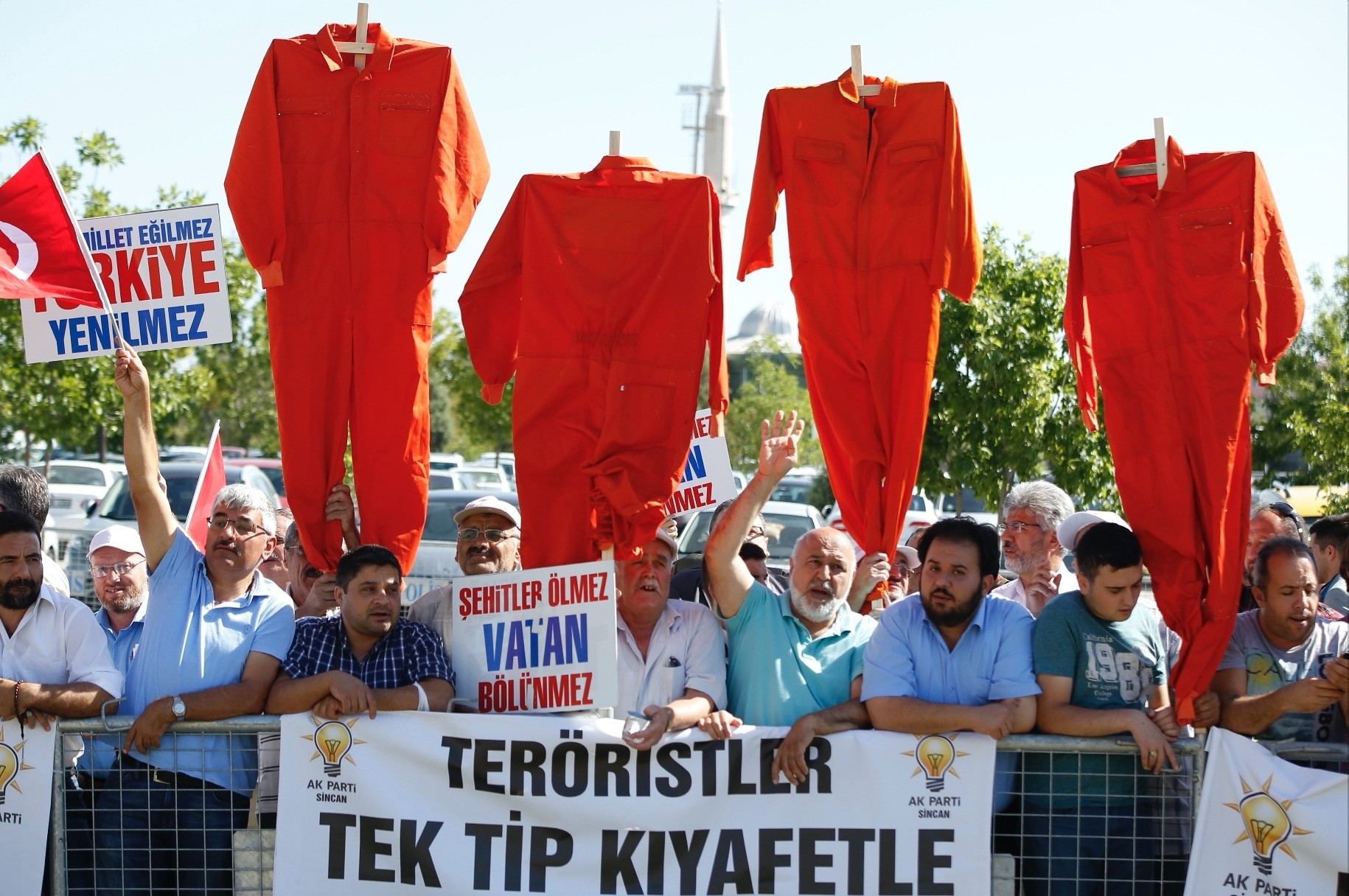 Protesters brandish orange jumpsuits as defendants in a major coup trial in Ankara are being brought to the court for trial on Aug. 1.
by Daily Sabah Aug 07, 2017 12:00 am

Amid a public outcry over the slick outfits of those being tried for last year's coup bid, President Recep Tayyip Erdoğan has announced that the suspects would be dressed in jumpsuits and terror suspects will wear jackets and trousers

No more "Hero" T-shirts or elegant suits for those tried for the July 15, 2016, coup bid that killed 249 people, as President Recep Tayyip Erdoğan formally announced new attire for jailed suspects.

Addressing a rally on Saturday, Erdoğan said defendants would be required to wear outfits, ranging from jumpsuits for coup plotters to jackets and trousers for terror suspects. The move, already reported in the media outlets and voiced by the government, comes amid public outrage over the chic attire of hundreds appearing before the courts for the putsch attempt since last December.

Erdoğan said those involved in the "July 15 treason" will be mandated to wear a single type of clothing. "[Outfits] will be of a dark almond color," Erdoğan said. There have been sporadic protests outside the courtrooms where coup suspects were being tried, calling for orange jumpsuits to be worn by defendants, similar to jumpsuits for convicts in other countries. Orange jumpsuits were last featured in a trial in the capital Ankara last week, where 486 defendants accused of commanding the coup attempt are being tried. "They can't wear whatever they want anymore," Erdoğan stated. The defendants in a trial of those who tried to assassinate Erdoğan during the coup bid were the first to raise outrage for their well-ironed, elegant suits. Gökhan Güçlü, an officer among the defendants, also angered those watching the trial for wearing a T-shirt with the inscription "Hero" in the front. Güçlü was ordered to replace the T-shirt and the company manufacturing the T-shirts ended the production after another man, this time a relative of a coup suspect in another trial, wore the same type of T-shirt. Though the defendants opted to wear T-shirts after the suit controversy, the T-shirts also angered crowds staging protests against the coup as most of the defendants donned expensive T-shirts to their trial in Ankara in a recent hearing.

Unlike the United States and other countries, Turkey does not have jumpsuits or uniforms exclusive to prisoners or defendants, and under a controversial interpretation of the law, judges sometimes reduce sentences in cases where a defendant dresses in a suit and observes "good manners toward judges" during the hearings.

Authorities have detained and arrested tens of thousands of people since the coup bid, blamed on infiltrators of the Gülenist Terror Group (FETÖ) in the army that was quelled thanks to strong public resistance. The trials, except a few where the defendants are handed down life sentences, are underway all across the country. Fetullah Gülen, the U.S.-based fugitive leader of the terrorist group, is the prime suspect in all the trials. So far, only a few defendants have acknowledged their links to FETÖ, despite abundant evidence of meetings with the group's members. The majority of the defendants have also avoided naming FETÖ as being behind the coup. The plaintiffs' lawyers say this is a defense strategy to vindicate the terrorist group, hoping that FETÖ will eventually "liberate" them from prison.

In his Saturday speech, President Recep Tayyip Erdoğan said that the putschists resorted to "a tactic of lying" though they were caught red-handed. "They have blood on their hands and the courts will issue verdicts for their actions. They are performing a charade in the trials but once they are convicted for their treason, their murders, they will face the cold hard reality," Erdoğan said. He was referring to a string of testimonies by "civilian" members of FETÖ captured in Akıncı, the command base of the pro-coup troops in Ankara. Two defendants had claimed they were "not the people" seen in a high-definition security camera footage clearly showing the two inside the base.