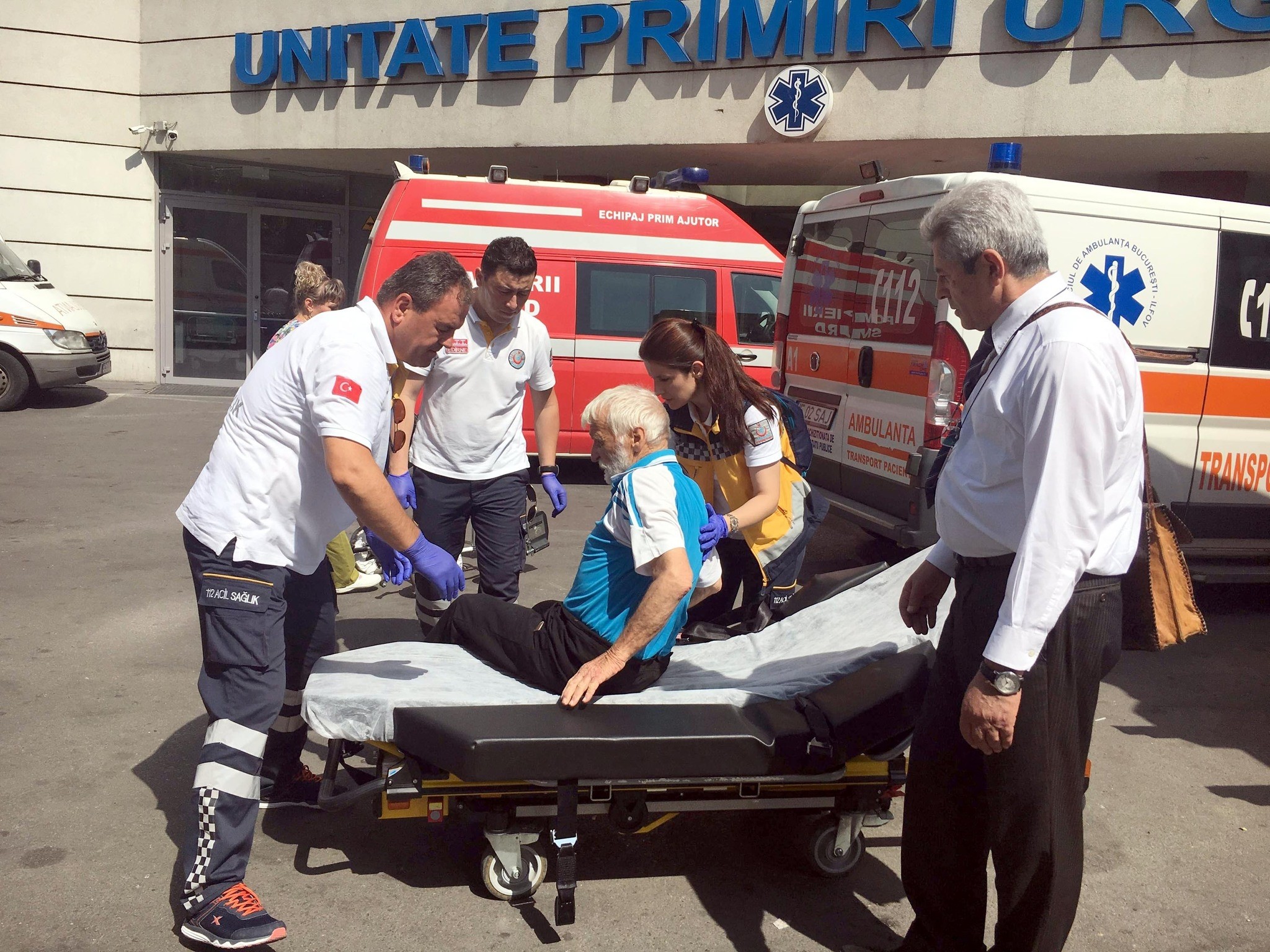 The medical team helps a Turkish man onto a stretcher as they prepare to transfer him from a Romanian hospital to Turkey.
by Daily Sabah with DHA Aug 14, 2017 12:00 am

Founded three years ago in Edirne, a Turkish province bordering Greece and Bulgaria, Cross-Border Health Squad (SES) work around the clock to extend a helping hand to the patients in the Balkans seeking treatment in Turkey.

The team, consisting of volunteer doctors and paramedics, work under the local health authority in the northwestern city and are chosen for their intimate knowledge of the Balkan communities.

Their work focuses on Muslim communities and people of Turkish origin but the team will soon start extending a helping hand to all nationalities in the Balkan countries.

Each volunteer speaks the language of the countries they travel and most hold dual citizenship of those countries and Turkey. Their fast service impresses patients, team members say as they recount how patients hug them as a sign of affection for Turkey.

Twenty-four men and women work in shifts in two fully-equipped ambulances and accompany patients throughout their journey to Turkey for the free service.

Dr. Muhsin Kişioğlu, head of the state-run health authority in Edirne, says they work upon the demand of the patients or the families of patients applying to Turkish diplomatic missions in their countries.

"Those patients live in European countries where medical services are paid and we offer them free transfer to Turkey and provide them with cheaper treatment services. Currently, we transport people with Turkish citizenship in the Balkan countries and people of Turkish origin but thanks to a new regulation by the governorate, we will extend this service to other people as well. Thus, Edirne will become a health hub in the Balkans," Dr. Kişioğlu said.

He added that the service has grown quite popular since its inception and that they have brought nearly 20 people this year so far, from only two cases in 2014.

Most patients are those suffering from heart attacks, which require emergency treatment and the rest are those injured in traffic accidents.

Nihal Kaşıkçı, a member of SES, says their meetings with patients are often emotional.

"(Turkish citizens) feel they are not left alone when abroad," she said.

Their trips to the Balkans are not without problems, though. They complain about lengthy waits on the border due to tight control.

They were once forced to put their ambulance through an X-ray device on the border as the customs officials on the other side of the border. They were allowed back in Turkey once the officials learned what their mission was.

The revival of the once crumbling healthcare system in Turkey and a boom in the number of modern, fully-equipped hospitals has made Turkey a rising power in health tourism in the recent years, especially among citizens of neighboring countries.

Edirne, for instance, is a favorite spot among people from Greece, a country crippled by economic crisis and prevalent general strikes that hurt healthcare.

Authorities say more than 1,500 people arrived from Greece for treatment in Edirne in the past two years, compared to only a few patients arriving yearly for treatment in the previous years.