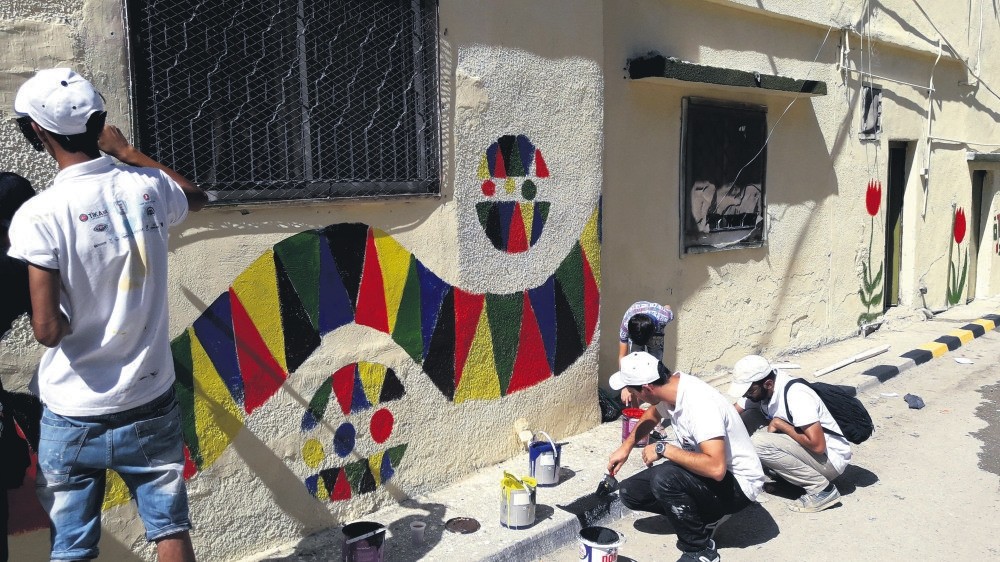 A group of university students volunteered in a state-sponsored program to reach out to disadvantaged communities in Sudan, Uganda and Palestinian refugees in Jordan where they repaired schools and held social activities for children

An exemplary project spearheaded by the state-run Turkish Cooperation and Coordination Agency (TİKA), Turkish Airlines (THY) and Anadolu Agency (AA), brings together Turkish university students with disadvantaged communities in Africa and Jordan. Setting out from Turkey last week, volunteers repaired schools in Sudan, interacted with children as part of the "experience sharing" program and helped with maintenance work at a Palestinian refugee camp in Jordan.

Twelve students who arrived in Sudan painted the walls of the Nur-i Osmaniye education complex at the Hasabe village in Omdurman province. They also tried to cover the basic needs of the school and during downtime, played games with the students.

Harun Eray Karadelen, an engineering student at Istanbul Technical University, said, "We came to touch the hearts of our Sudanese brothers and sisters."

Another group of students have also begun their journey to Niger.

Abdullah Harun Talas, another economy student at Beykent University, said they would visit the Niger-Turkey Friendship Hospital and an orphanage. He said they would also take part in the renovation of a mosque.

"We will rebuild our sense of friendship with this program," Talas said.

Esad Mücahit Eskimez, a student at Istanbul University's political science and international relations department, said that they would stay in Niger for nine days.

"Niger is one of the most affected countries in Africa from colonialism. We will have an opportunity to witness and understand what is happening there through this program," Eskimez said.

In Jordan, students did landscaping, painting and maintenance work at the Marka refugee camp in the capital Amman in the company of Jordanian students.

They repaired dilapidated buildings in the camp and painted symbols describing the Turkish-Palestinian friendship on the walls. They installed garbage cans, lampposts and flower pots along the street while Palestinians staying in the camp served meals as a sign of gratitude to the students.

"What mattered to me the most here was to see the smiles of Palestinian refugee children when they have seen what we did," he said. "We almost built a street from scratch but what is more important, we built a bridge with our Palestinian brothers and sisters," Hasan Hüseyin Sarkı, another student, added.

In Uganda, volunteers spoke about Turkey to grade and high school students and participated in a program organized by Istanbul-based Kartal Anatolian Imam-Hatip School whose teachers entertained Ugandan children with chemical and physics experiments.

Students then delivered stationery aid to students in another school in Uganda's Kampala.

A total of 200 students from Turkey are visiting 18 African countries from Aug. 5 to Aug. 30 to take part in development or aid projects and develop a sense of volunteerism under the "2017 Africa Experience Sharing Program."

The program, proposed by Bilal Erdoğan, the son of President Recep Tayyip Erdoğan, who is known for his work in nonprofit organizations, is also supported by nine Turkish charities.