Putschist colonel who killed civilians claims he defended base 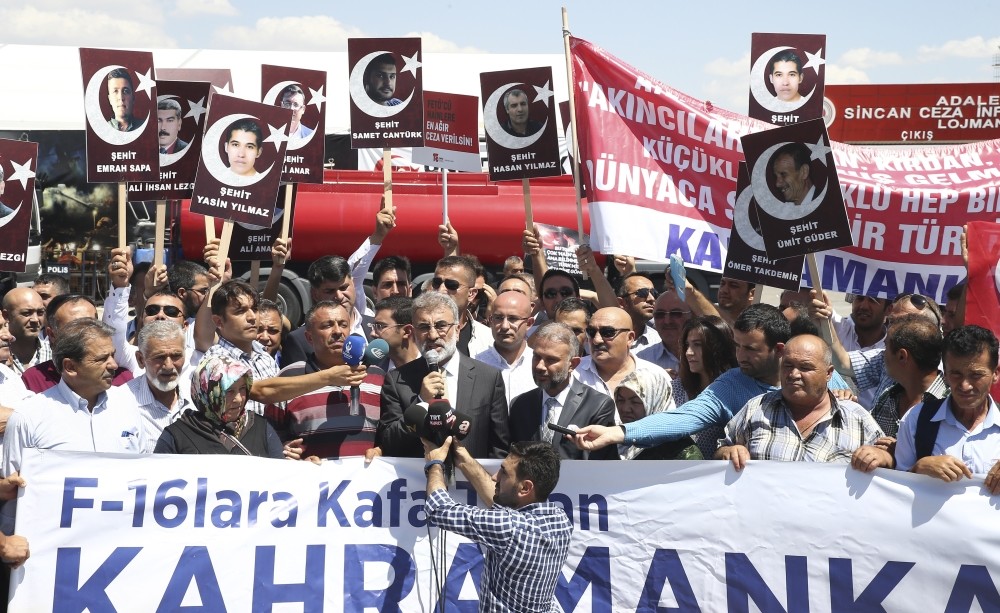 The weekly hearings in Turkey's biggest trial on the July 15, 2016, coup attempt that killed 250 people opened yesterday in the capital Ankara with a former colonel presenting his defense.

Ali Eraslan, who commanded the unit that opened fire on civilians, who had amassed outside a military base to convince putschists to stop the coup, and killed nine people, denied the charges. Eraslan said he did not order anyone to fire on the crowd though he claim that the orders he gave were meant to stop "provocateurs trying to storm the base."

The base in question is Akıncı, where 486 defendants in the case commanded the nationwide putsch bid blamed on infiltrators of the Gülenist Terror Group (FETÖ) in the army.

Eraslan was the deputy commander of a humanitarian aid brigade of the army when he received orders from his superiors to go to Akıncı on July 15, according to his testimony. He claimed he was ordered to assemble a team of soldiers "against riots" at the entrance of the base.

"I was called by the operations center of the Land Forces Command and told that a large-scale terror attack was underway and the commanders would command an anti-terror operation from Akıncı," he told the court.

He said he was not aware of that a coup was underway well past the midnight, a few hours after the country's leaders announced on TV that FETÖ was behind a putsch bid.

Meanwhile, he also said that the booing crowd gathered outside the base was "not protesters," referring to the families of nine unarmed civilians who were killed by Eraslan's unit as they tried to persuade soldiers to surrender.

"Among them were some drunkards who were saying 'let's burn down the base," he said, adding that "provocateurs" were among the crowd.

The putsch attempt was quelled thanks to a strong public resistance against the putschists, accompanied by anti-coup actions of police officers and some military officers.

President Recep Tayyip Erdoğan mobilized crowds in live broadcast on the night of July 15 and told them "to reclaim democracy."

Upon Erdoğan's call, people all across the country took to the streets and they simply stood before the tanks to stop them or blocked the entrances and exits at the military bases to prevent putschists from taking over cities.

Eraslan told the court he did not fire on anyone and did not order his troops to fire on the crowd though he could not explain why the troops did not obey his orders and fired anyway.

The former colonel also denied links to FETÖ. Fetullah Gülen, the U.S.-based leader of the terrorist group is the prime suspect in all coup trials and is accused of ordering his point men in Turkey to carry out the coup plot.

Several senior FETÖ figures were jailed after they were captured in Akıncı on July 15 while Adil Öksüz, allegedly the real mastermind of the coup attempt, remains at large. Ali Eraslan told the court that there was "unusual activity" at the base and he thought they "declared war against Syria."

He said he received a martial law directive and believed it was against any terror attacks and "only realized that there was a coup" when he talked to civilians gathered outside the base.

When the judges asked him why he did not "defect" to anti-coup civilians convened at the entrance of Akıncı, Eraslan said he decided to stay in the base "to maintain security."

At the trial that opened earlier this month, all of the defendants face aggravated life sentences. The indictment charges suspects, including 25 generals, of trying to topple the government through armed insurrection.

Adil Öksüz, originally a theology lecturer who turned out to be FETÖ member in charge of group's infiltrators in the army is the second main suspect. Kemal Batmaz, an executive at a FETÖ-linked company is another non-military figure in the case accused of coordinating the putsch bid with Öksüz and generals.

More than 1,000 lawsuits were filed against FETÖ after the attempted putsch. The coup trials alone have 1,986 defendants.

Gülen, who lives in a tightly protected compound in Pennsylvania, is the "number one" suspect in most of the cases, along with Öksüz who disappeared after he was controversially released by a court following his capture at the Akıncı base.

Fetullah Gülen denies any links to the coup but evidence surfaced after the thwarted attempt showing that he actually gave approval for the plot to seize power by FETÖ-linked military officers, ranging from generals to noncommissioned officers.

The indictment on what happened at Akıncı provides details on various events that unfolded during the coup attempt around the base where warplanes took off to strike strategic locations.

The defendants are also accused of attempting to kidnap generals opposing the coup in Istanbul and of bringing them to Akıncı Air Base.

Army Chief Hulusi Akar and other top military brass opposing the coup were held hostage at the base that was closed down after the putsch bid. Prosecutors say Akın Öztürk, former head of the Air Forces, was the highest ranking military figure involved in the coup bid.

According to the indictment, Öztürk "organized and executed the coup" and "gave orders to coup plotters."