Chimp pals around with lion cub at Turkey’s largest zoo 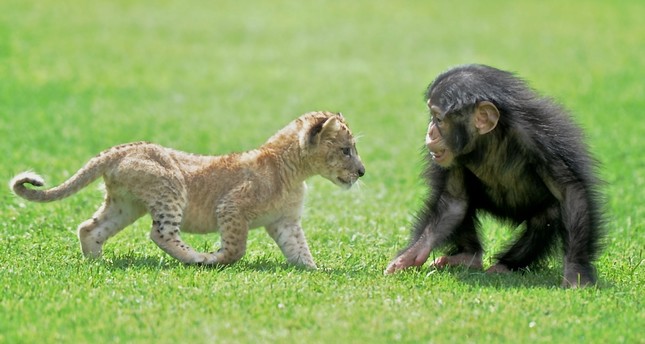 Both separated from their parents, a chimpanzee and a lion cub are winning the hearts of visitors at a zoo where they compete for their affection while their friendship blossoms.

"Cesur" (brave), a 2-month-old lion cub was brought to Gaziantep Zoo in southern Turkey from Şırnak province where he was confiscated from smugglers last week.

Here in the Turkey's largest zoo where 325 species live, he formed friendship with "Can" (soul), a 1-year-old chimpanzee rejected by his mother after his birth.

Celal Özsöyler, head of the local wildlife authority, told Anadolu Agency that Cesur might "dethrone" Can as the mascot of the zoo.

"Visitors are very interested in seeing the cub," he says, adding that they expect more than 3 million visitors this year thanks to the cuteness factor of the chimpanzee and the cub.

"He is more like a cat than a lion," Mehmet Taban, a visitor says as he watches the cub playfully extending its paws toward Can the chimp.

Share on Facebook Share on Twitter
Previous in Turkey September is almost here and people have begun to return to the city,... Next in Turkey Local authorities in Demre, a town in Turkey's southern Antalya district...
DAILY SABAH RECOMMENDS