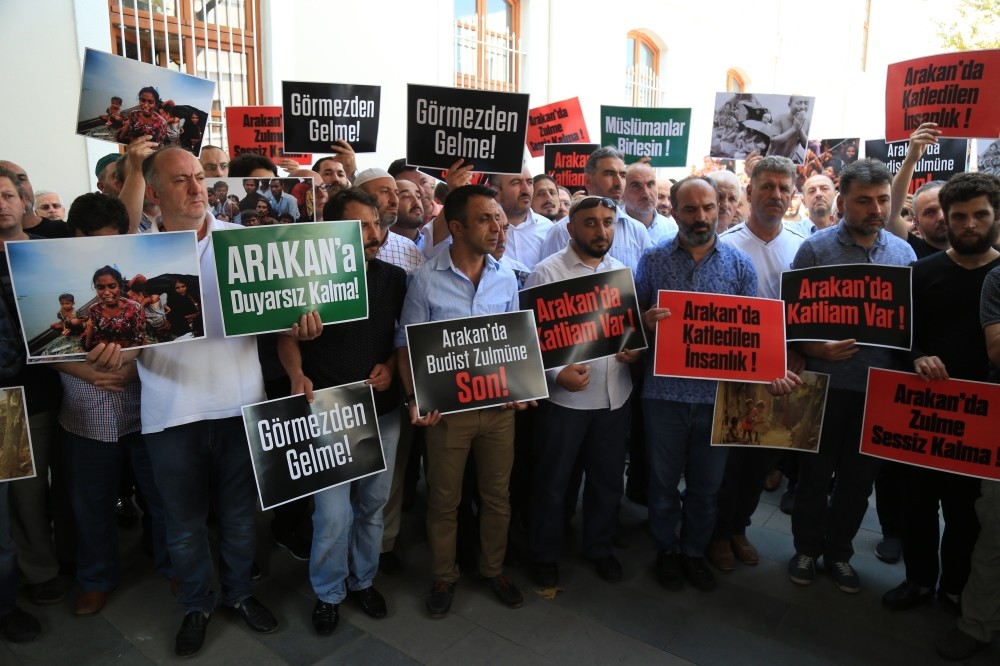 Demonstrators hold banners calling the world not to turn a blind eye to cruelty against Rohingyas.
by Compiled from Wire Services Aug 31, 2017 12:00 am

The Turkish public took to the streets yesterday and on Tuesday to denounce ethnic violence targeting Rohingya Muslims in Myanmar. As social media has been awash with photos of Rohingya Muslims stranded on the border with Bangladesh, Ankara condemned the crackdown on the community by the Myanmar army and has rallied the world to find a solution to the issue.

Over the past two days, Turkish non-governmental organizations (NGOs) staged rallies across the country to protest what they called the "massacre" of Muslims located thousands of kilometers away from Muslim-majority Turkey. The Muslim faithful performed funeral prayers in absentia as rumors were circulating that thousands of Rohingya Muslims have been killed since last week by the Myanmar army under the pretext of a crackdown against insurgents.

Bülent Şimşek, who was among the demonstrators in the central Turkish city of Sivas denouncing the attacks, said that Muslims are "supposed to be joyous" with the upcoming Muslim festival Eid al-Adha but are instead being faced with massacre and inhumane treatment at the hands of Myanmar security forces. "They are subject to a systemic policy of massacre and torture. They are being denied their rights and forced to live as a stateless community," Şimşek said at yesterday's rally.

Mehmet Kara, who issued a statement to the press on behalf of demonstrators in the northern city of Trabzon, said they support Ankara's call for the Organization of Islamic Cooperation (OIC) to take the necessary steps to end the crisis. "We call on Islamic countries and all humanitarian organizations around the world to take definitive action, to pressure the Myanmar government to stop the violence and support Muslims from Rakhine," referring to the Myanmar state where Rohingya Muslims live.