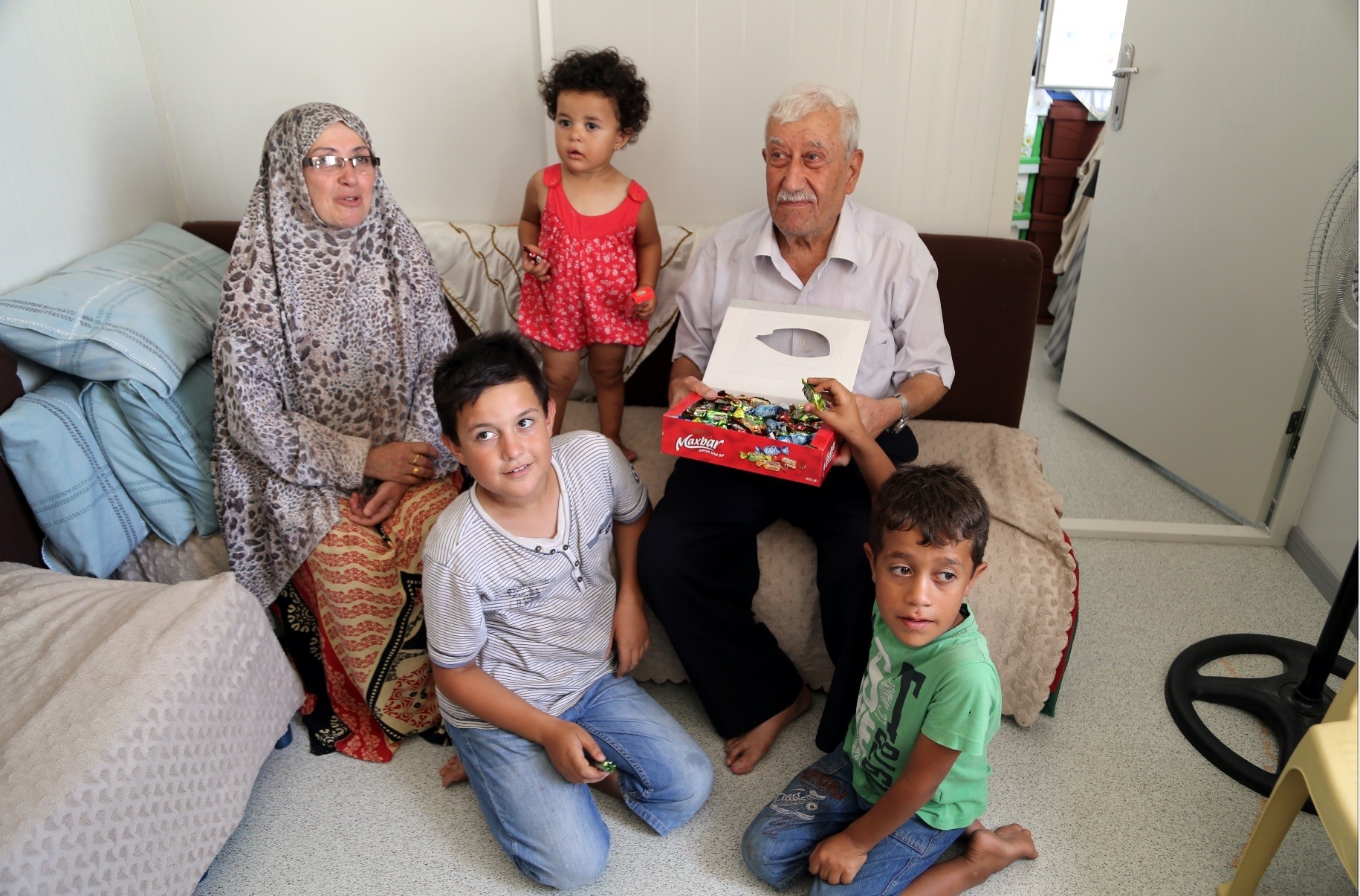 Muhammad Hasan Karrimo and his wife Melek hand out candy to their grandchildren who are among the few relatives they have in Turkey.
by Daily Sabah with AA Sep 01, 2017 12:00 am

Fleeing the civil war at home and taking refuge in Turkey, tens of thousands of Syrian refugees return to their country to mark the Muslim holiday Eid al-Adha, but millions others will celebrate it in Turkey, unable to go or with no family left to visit back home

Eid al-Adha (Feast of Sacrifice), also known as Qurban Bayram, is an occasion of celebration for Muslims around the world but for the majority of Syrian refugees in Turkey, it remains a rather solemn event so close, yet so far, from home.

Although nearly 100,000 refugees were able to travel back home to visit family members who stayed in war-torn Syria, the majority of the nearly 3 million could not for a variety of reasons. Some were too old and fragile to travel, while others had no access to their hometowns held by Daesh or Bashar Assad's forces. Others had no one left behind after losing family members in the six-year-old war.

In Boynuyoğun, a refugee camp in the Turkish border province Hatay, only 978 people out of 8,100 Syrians returned to Syria for eid.Others, like 67-year-old Melek Abdullah, reminisced about past Muslim festivals and longed to return though they can't. Abdullah was among the first wave of refugees who took shelter in Turkey after the civil war broke out in Turkey's southern neighbor."It has been 14 eids here now," she tells Anadolu Agency, adding Eid al-Fitr, another annual Muslim festival, to the religious events she has spent in Turkey.Abdullah does not complain about her life in Boynuyoğun, where refugees are provided with every service and are accommodated in modern housing units rather than tents, far from the daily airstrikes that made life hell for millions of Syrians. Still, her eids in Turkey are "nothing compared to those back home." "It was such a joy to welcome guests during eid. We used to prepare dishes and desserts days before. We used to give gifts to each other. I miss those days so much. My siblings are still in Syria and I miss them so much," the elderly woman said.

Muhammad Hasan Karrimo, 75, got teary as he explained how much he misses his country."I looked back one last time when I left Syria on foot and wondered if I would be able to go back one day ever. I was crying," he recounted the day he left his homeland in 2011.

Ragiba Tamashe, 48, has no relatives at all and said she doesn't even know if they are alive or not. "Eid used to be a happy occasion, but I can't bring myself to celebrate it. I feel choked [on tears] now," she said.

About 100,000 Syrian refugees crossed into their country from two border crossings since the second week of August. The vast majority of the Syrians who made the trip went to "safe" places that have been spared from utter destruction, or those towns that are in the process of being restored after being liberated from the terrorist group Daesh. Under tight security measures, they crossed to the other side of the border where they were welcomed by opposition forces fighting the Assad regime.

Turkey is probably the only safe haven in the region for refugees, with nothing left in Syria except for surviving relatives.Since 2011, the Syrian conflict has evolved into an all-out civil war, from which Turkey has received the largest number of refugees compared to other countries in the region. A small fraction of refugees stay in modern camps set up in border cities, while the majority live in housing they rent or have bought, often in rundown and abandoned buildings. Official border crossings were closed in 2015, barring exceptions in cases such as serious injuries, to prevent a spillover of the conflict and to stem the flow of refugees. Ankara has also been building a wall along the border to curb the cross-border movement of fighters. Turkey is a staunch advocate for the establishment of a safe zone inside Syria for those who have been internally displaced, which would ostensibly prevent attacks on them by the Assad regime and the Daesh terrorist group, among others.