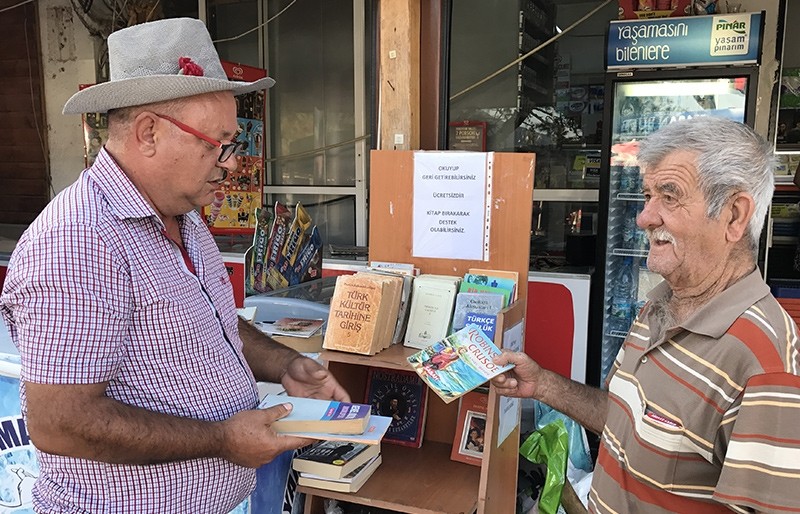 A dedicated book lover in Turkey's western Izmir province launched what could be considered as the country's first street library.

53-year-old Cem Liman came to the conclusion that the books he read at home would be more useful if he shared them with everyone else instead of storing them in a bookcase in his house.

With the ultimate goal of setting up a "street library," Liman established a small bookshelf next to a stall of the favorite visiting market in İzmir's Karaburun district.

Liman told Anadolu Agency that he came up with the idea of setting up a street library when he was moving from his old house. At first he thought he could donate his old books to a local library, but he changed his mind after realizing that not many people continue to patronize the library, mostly because they do not want to go through the registration process. Instead, Liman decided to make the process more accessible for everyone by setting up a "street library," which would enable all people passing by to come and borrow books for free.

The owner of the small shop supported Liman's idea and they established a library with almost 500 books with a note asking the reader to return the book after reading it.

The library drew more attention in the city than Liman has anticipated. He noted that book lovers from all over Izmir came to donate new books to the "public library." After six months, the amount of books almost reached a thousand, he added.

Liman noted that he was scared that the amount of the books would decrease after some time. But he now aims to open the real "street library," which will always be open for everyone.

"I want everyone to read" Liman said and added: "Books are just like knowledge – it multiplies as you share it."

The 53-year-old book lover added that he wants the younger generation read more books and to show the power of the books to everyone.

"I hope I will reach my goal as soon as possible" Liman said.