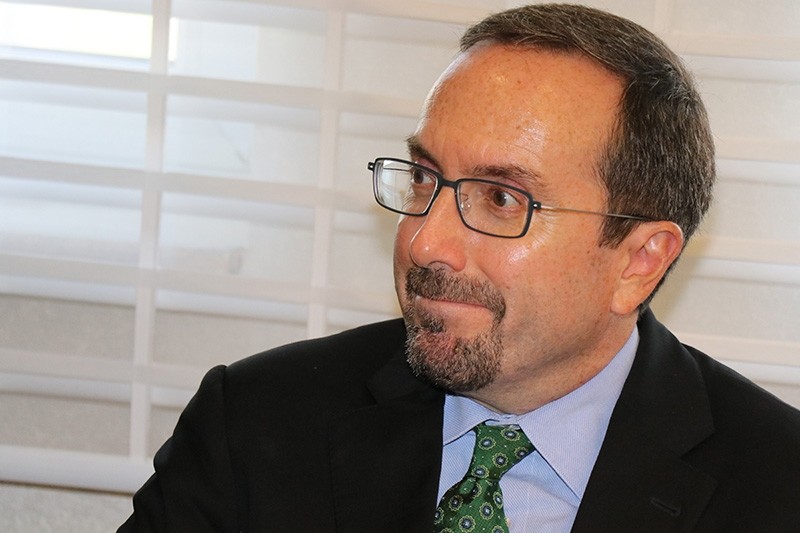 The US Embassy in Ankara has not responded concerning the disinvitation of a columnist working at a newspaper that reported on the indictment on an employee at the U.S. Consulate with links to terrorism suspects and Foreign Ministry's remarks that the suspect was not on the official staff list of the embassy

As the embassy of a country that advocates global press freedom and is a leading actor in counterterrorism, the U.S. Embassy in Ankara apparently failed at both in just a few days. After a harsh statement over the arrest of a U.S. Consulate employee for alleged links to a terrorist group, the U.S. Embassy now finds itself in hot water for disinviting Hilal Kaplan.

Kaplan is a columnist for Daily Sabah and its sister newspaper Sabah and says her invitation was rescinded from an event by U.S. Ambassador John Bass due to a Sabah report she did not write on the arrest of an employee of the U.S. Consulate in Istanbul. Moreover, the embassy has remained silent as questions pile up concerning the arrest.

It all started when M.T., a locally employed staff member, according to the U.S. Embassy, was arrested earlier this week for his alleged close contacts with dozens of former police chiefs and officers jailed for links to the Gülenist Terror Group (FETÖ). Ankara blames FETÖ for the July 15, 2016 coup attempt that killed 249 people. The U.S. Embassy in Ankara was quick to denounce the arrest on "anonymous, baseless allegations" in a statement on Thursday. A few hours later, the Foreign Ministry claimed that M.T. was not "on the list of personnel working at U.S. missions," raising suspicions for some that the man who told investigators he works for the Drug Enforcement Administration (DEA) might be a secret agent.

Sabah had a report on its front page on Friday about M.T.'s alleged FETÖ links. Kaplan received a phone call from the U.S. Embassy's spokesperson who told Kaplan that her invitation to a meeting with outgoing U.S. Ambassador John Bass had been pulled because of Sabah's story. Kaplan took the incident to social media and questioned how they disinvited her for a story she did not write. "From now on, they have no right whatsoever to blame President Recep Tayyip Erdoğan for providing accreditation to some journalists and some others not. I've never met Bass before, and I was going to go there because I had questions. In particular, I'd ask why FETÖ [suspects] who stopped MİT [National Intelligence Organization] trucks made phone calls to the consulate recurrently and why contact officer M.T., who has been a U.S. Consulate official since 1982, wasn't on the employee list. This happened to be a farewell perfectly fitting John Bass. I'm saying goodbye to the most unsuccessful U.S. ambassador in our history," Kaplan said in a statement on Twitter.

Speaking to Hürriyet daily, Bass said some journalists working for media outlets that publish "fictitious" stories were not invited to the event.

The fictitious story Bass refered to is taken from an official indictment against M.T. The U.S. Consulate employee is charged with espionage and violating constitutional order, a terrorism charge. "The suspect had phone contacts with 121 people investigated for links to FETÖ and contacted people using ByLock hundreds of times," one section of the indictment reported by Anadolu Agency (AA) claims, referring to the encrypted messaging app used by the terrorist group. "The suspect acted as a liaison between members of FETÖ and its leader, Fetullah Gülen, who lives in Pennsylvania," the indictment adds, claiming there is strong evidence requiring M.T.'s arrest.

Kaplan was flooded with messages of support on social media while the Media Association, a non-profit organization, has condemned her disinvitation. The statement released by the association Friday claims the cancellation showed Bass and other embassy officials' hypocrisy regarding freedom of speech. The association said the move was "an ugly censorship attempt to silence media" and prevent uncovering the facts. "The U.S. Embassy has only punished itself by trying to punish a journalist over investigative reporting activities conducted by the newspaper she has been working with." The statement urged the embassy to follow a more democratic, transparent and balanced policy in its relations with media outlets. "This disrespectful attitude toward one of our members undermines our longstanding partnership and devalues it," the statement said in a send-up to the Oct. 5 statement by the U.S. Embassy on the arrest of M.T.

According to the indictment, the suspect was in contact with a number of former police chiefs in Istanbul where he worked, and all those police chiefs involved in 2013 coup attempts by FETÖ members in the judiciary and law enforcement. M.T. was also in touch with Oktay Akkaya, a former lieutenant colonel who was among the main actors in the 2016 coup attempt. M.T. also had suspected contacts with Zekeriya Öz, a fugitive former prosecutor implicated in a string of FETÖ-linked plots to imprison the group's critics as well as the 2013 coup attempts. M.T. said in his initial testimony that he worked as an employee of the DEA's Istanbul office under the consulate and that his contacts with FETÖ suspects were "due to his duties" in the DEA. He denied links to FETÖ, but said that he was present at a meeting of U.S. officials with Öz in 2013. He said Öz was invited to the United States about a case that U.S. officials were monitoring, but he did not elaborate.

Government spokesman Deputy Prime Minister Bekir Bozdağ, said in televised statements on Friday that the U.S. Embassy should consider how they employed someone "so linked to a terrorist group." "How can someone intricately linked to a terrorist group work in a U.S. mission without the U.S. Embassy notifying Turkish authorities of his employment? How can the U.S. Embassy employ someone facing such allegations? They should think about it," Bozdağ said. He also denounced the strongly worded statement from the U.S. Embassy that said the allegations were "without merit." "The Turkish judiciary assesses allegations and evidence. They are authorized to act in line with Turkish laws, and certainly, executed its authority. Someone working at the embassy is subject to criminal inquiry if he or she commits a crime. The Turkish judiciary does not act with political motivations. It acts independently," Bozdağ asserted. He said it was in the joint interest of Turkey and the United States to maintain good relations and "to do that, you have to act sensibly." "If you employ someone with terror links, it hurts relations," Bozdağ added.

This is not the first time that staff members at a U.S. mission have been in the limelight of the Turkish media for reports call "dubious contact" with FETÖ-linked figures. Before Adil Öksüz, the alleged mastermind of the 2016 coup attempt, dumped his cellphone and disappeared after his controversial release, he received a call from an Istanbul telephone number. Someone from the U.S. Consulate called the former theology lecturer to inform him that his visa application had been canceled, according to U.S. Embassy claims.

In an indictment in the MİT trucks case that Kaplan referred to in her statement, Muharrem Gözüküçük and Bayram Andaç called the U.S. Embassy and the U.S. Consulate one day after the raid by FETÖ-linked officials on trucks belonging to the intelligence service in March 2014. Both men are civilian imams for FETÖ, according to prosecutors, a term used to describe FETÖ's operatives who commanded the group's members in the military, police, judiciary and bureaucracy. Andaç organized the controversial raid in southern Turkey that raised outrage and, on Jan. 20, he made three phone calls to these U.S. missions in Turkey.