Syrian, Turkish women find vocations that give back in southeastern Turkey 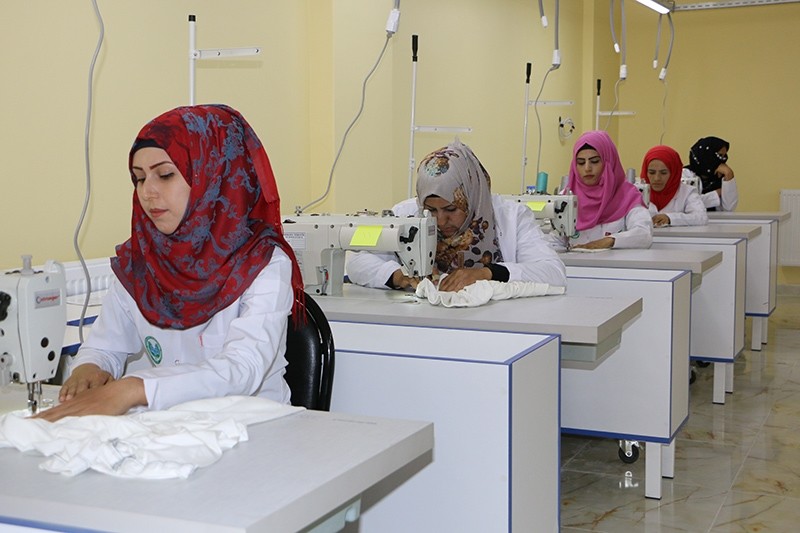 At a clothing workshop in southern Turkey, 400 Turkish and Syrian women produce goods that will be given free of charge to educational institutions in need, especially in Turkey and Syria.

The workshop, in the Akçakale district of southeastern province of Şanlıurfa, recently opened through a partnership between the Kuwait-based Al Salama Association and the Turkish Akçakale Hilful Fudul business association.

Receiving in on-the-job training, women at the workshop learn a trade, provide for their families and give back to others in need.

The products produced at the workshop will be given to educational institutions in Turkey and other regions.

"Our aim is to provide women with both jobs and a profession," Akçakale Hilful Fudul Association Chairman Hamit Ataman told Anadolu Agency. "We want to teach them fishing instead of giving them fish."

Adil El Gun, vice president of the Al Salama Association, said the workshop hires without regard to language, race or color, and without expecting a profit.

On a visit to the Akçakale district, Gun and his associates realized Turkish and Syrian women would be helped by jobs in clothing production. Al Salama proposed the idea to Akçakale Hilful Fudul, which accepted the partnership.

With 12 new projects planned for the coming year, the organization hopes to employ up to 3,000 women in the future.

"Our next project of opening a carpenter's workshop will employ 200 Syrian and Turkish sisters. We will also set up a migrant hospital where 25 doctors will work. When all our projects are completed, we will be able to offer 3,000 jobs," Ataman said.