14 percent of Syrians did not return to Turkey after August holiday, report says 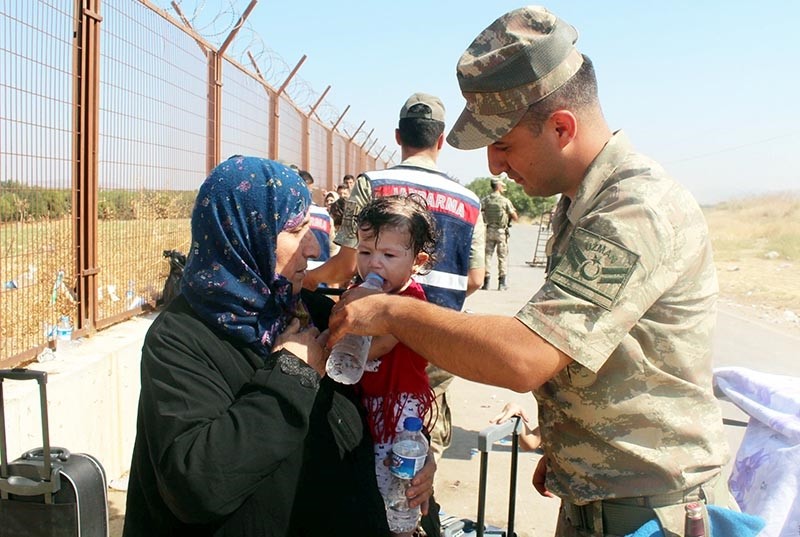 A Turkish gendarmerie officer gives water to a Syrian refugee child preparing to cross the border on Qurban Bayram holidays in August (Sabah File Photo)
by Daily Sabah with Agencies Oct 16, 2017 12:00 am

Of the almost 50,000 Syrians residing in Turkey who visited their hometowns for August's Qurban Bayram (Feast of the Sacrifice, also known as Eid al-Adha) holiday, 14 percent did not return to Turkey.

Between August 15-30, 47,083 Syrians passed through Öncüpınar Border Gate in southeastern province of Kilis on their way home for the Muslim holiday as Turkish authorities opened the crossing for a rare occasion of allowing visits to this southern neighbor of Turkey.

To take advantage of the opened border crossing, Syrians had to register online and agree to return to Turkey by Oct. 15.

Of those, 6,715 have not returned ahead of the deadline that expired on Sunday.

The voluntary returns are concentrated in northern Syrian towns liberated from the terrorist groups with the assistance of Turkey to Syrian opposition.

Almost all of the refugees traveled to their hometowns Aleppo, Azez, al-Rai, al-Bab, Jarablous, Mare, Soran and Aktarin. Jarablous and al-Bab were the first towns liberated from the control of the Daesh terrorist group by the Syrian opposition backed by the Turkish military during last year's Operation Euphrates Shield.

Most had relatives still living in Syria, which has been the scene of an unprecedented exodus since 2011 when an uprising against the Bashar Assad regime began.

As the six-year conflict in Syria winds down, many displaced Syrians are returning to their hometowns, both within Syria and across international borders.

A U.N. High Commissioner for Refugees (UNHCR) report in August indicated more than 600,000 displaced Syrians returned home to date in 2017.

Returners cited varying reasons for repatriation, including improved economic and security conditions in their hometowns.

Despite shortages of resources, many are willing to take the risk at the prospect of being home.

"There's nothing better than a person's country. It will always be better than any other country," said 19-year-old Rahaf, who returned to Syria for August's holiday.

Turkey has the largest number of Syrian refugees worldwide, over 3 million, as the number of people uprooted from their homes due to devastating conflicts and violence hits the highest on record, according to the U.N.

Turkey is probably the only safe haven in the region for refugees, with nothing left in Syria except for surviving relatives. A small fraction of refugees stay in modern camps set up in border cities, while the majority live in housing they rent or have bought, often in rundown and abandoned buildings.

The official border crossings were closed in 2015, barring exceptions in cases such as serious injuries, to prevent a spillover of the conflict and to stem the flow of refugees. Ankara has also been building a wall along the border to curb the cross-border movement of the fighters.

Turkey is a staunch advocate for the establishment of a safe zone inside Syria for those who have been internally displaced, which would ostensibly prevent attacks on them by Assad forces and Daesh, among others.