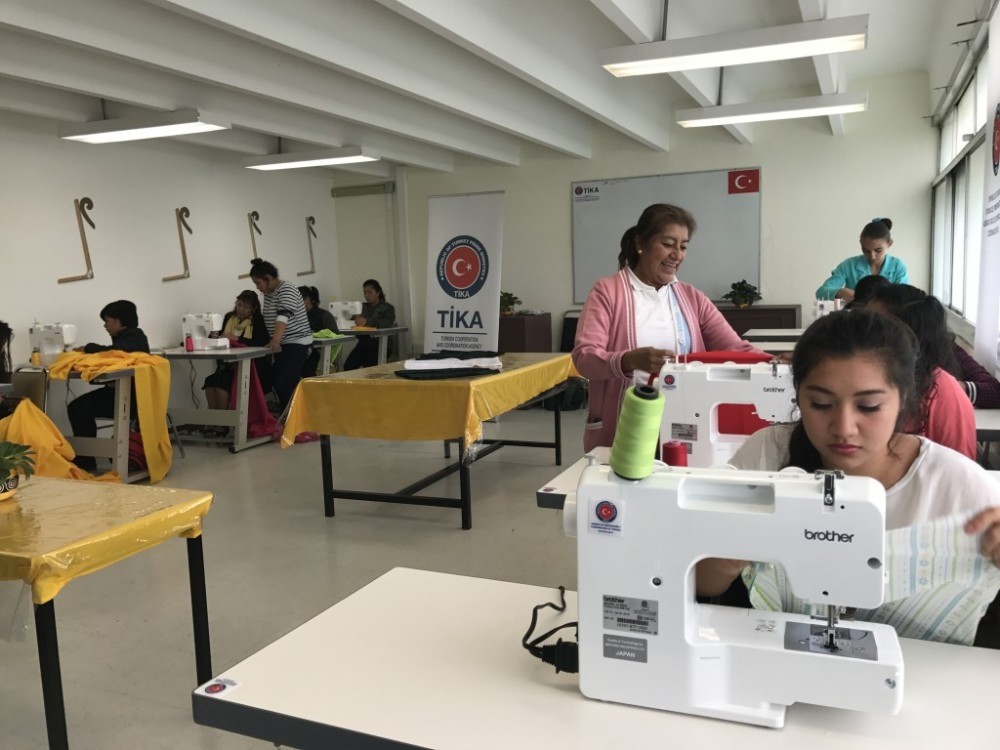 In Mexico, the development agency helps disadvantaged girls to learn a vocation by setting up sewing classes.
by Safure Cantürk Oct 17, 2017 12:00 am

The Turkish Cooperation and Coordination Agency, a state-run development agency, helps females across the globe access education and health services through a series of projects

Women and girls account for more than 75 percent of the refugees and displaced people at risk from war, famine, persecution and natural disasters according to the United Nations. As a result, the U.N. designated the theme for the 2017 International Day of the Girl as "EmPower Girls: Before, during and after crises." One leading Turkish development agency continues to reach out to girls in the far corners of the world to empower them. Active in 158 countries, the Turkish Cooperation and Coordination Agency (TİKA) is one of the actors increasing Turkey's clout in global humanitarian activities, often focusing on assisting young girls and women. With projects particularly focused on education and health, TİKA helps female victims of terrorism, poverty, conflict and famine, spanning from Afghanistan and Mexico to the Palestinian territories.

Two years ago in the Palestinian town of Nablus, the agency built a high school for girls that now hosts hundreds of female students.

In Pakistan, TİKA fulfilled a promise by then Prime Minister Recep Tayyip Erdoğan in 2010 who said Turkey would build a school in the area affected by flash floods. A 32-classroom school was opened three years ago. The school serves 200 girls, all orphans who stay in an adjacent dormitory furnished by the Turkish agency.

In Kenya's Kamukunji, the agency supplied education material to a boarding school for girls from impoverished families.

TİKA also extended a helping hand to a shelter for orphan girls between the ages of 9 and 18 in Mexico. With the sewing machines donated to the orphanage, the agency helps the girls to learn a vocation through sewing classes. Also in Mexico, TİKA set up computer classes for an educational center catering to the country's indigenous people who have limited access to education in rural areas.

In Afghanistan, the agency set up science laboratories at two schools serving 10,000 female students and renovated a high school for girls in the capital Kabul. In Bangladesh, the TİKA set up an educational center in Cox's Bazaar, a Bangladeshi border district receiving an increasing flow of Muslim Rohingya refugees fleeing violence in Myanmar. Apart from the computer classes and playgrounds for children, TİKA also set up a vocational workshop to train teenage girls.

In Niger's Niamey, the agency built a maternity clinic and rehabilitation center for women. The 51-bed center aims to help obstetric fistula patients, a condition related to a childbirth injury caused by delayed delivery. The delayed deliveries are linked to limited access to health services, something prevalent in the poor parts of the West African country. Due to superstitions stigmatizing the women suffering from the condition, Niger women struggle to reintegrate into society after recovery. The center will also provide assistance for the reintegration of women.