Androids of Anatolia: Mass production of locally made robots begins 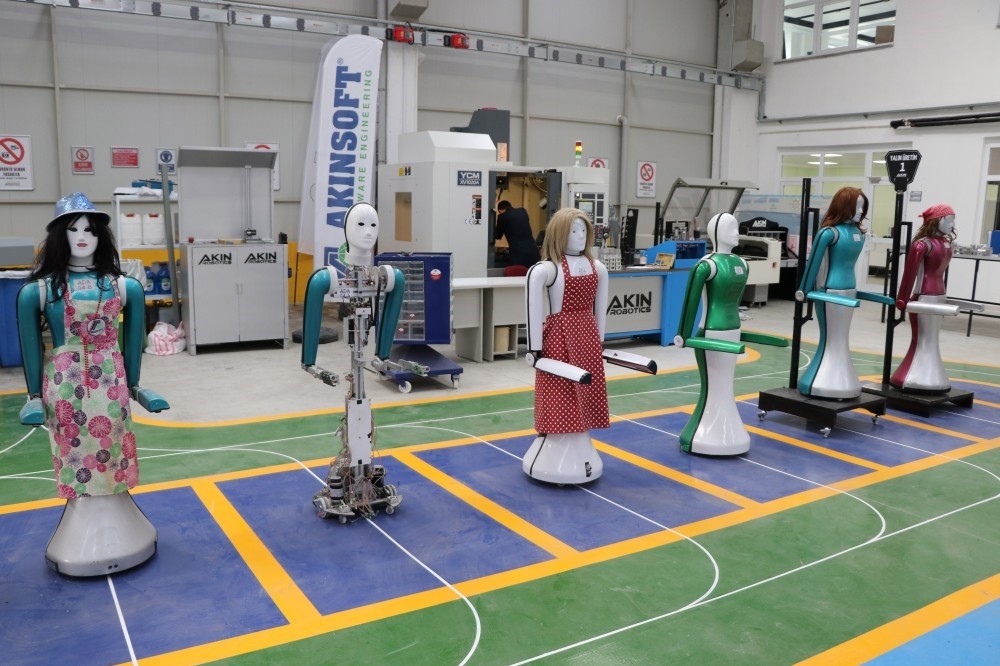 Robots built in the factory will be primarily used in service sector.
by Compiled from Wire Services Oct 18, 2017 12:00 am

A company in Turkey's heartland unveiled the mass production of what they touted as entirely locally-made humanoid robots. The robots will be used primarily in the service sector.

Next to a stretch of highway in the central province of Konya in the heart of Anatolia, a blue and white building houses the future of Turkey's domestic robot technology.

Though it is not the first company, or individual, to build a robot in Turkey, the company plans to make a name for itself with its androids that are primarily designed for the service sector.

With a TL 20 million ($5.5 million) investment, Akınsoft officials boast that their robots are Turkish made in their entirety, from the processor to mechanical components.

According to the Turkish media, this is the first humanoid factory in a country that seeks to catch up with the rest of the world in its bid to be a growing economy.

Although the factory will be officially opened on Nov. 4, Akınsoft already produced three models named Akıncı 1-2-3 respectively. Akıncı-1 was the first Turkish-made humanoid with artificial intelligence when it was introduced in 2009.

In Akın Robotix factory, the company will manufacture 16 different models which were shown to the press yesterday. Dr. Özgür Akın, chairman of the board at the company, says all components of the robots were built in their own laboratories, "from software to mechanical parts."

"It is a one hundred percent domestic robot," Akın underlined.

Robots have a built-in Internet connection and a high level of artificial intelligence. They also have a simple programmable interface enabling users to reprogram them for different tasks.

"Housewives are especially interested in them and they ask us on social media whether they can use the robots in housekeeping," he said.

Indeed, housekeeping is among the basic tasks the robots are programmed to do.

They can also be used in hospitals to attend basic needs of the patients or more complicated tasks of planning medication time, enabling patients to assign them tasks via voice activation or simply acting as a companion for patients. A built-in screen helps patients to go online and will especially be beneficial for bed ridden or amputee users thanks to online access through voice commands.

It will also be used for security and in department stores the robots will be used as "clerks" with their basic knowledge of products on sale or simply to conduct polls with customers.

The robots can make human-like moves, smell and recognize faces.

"They can avoid obstacles and recognize objects they touched," the chairman said.

No price is fixed yet for the robots but Akın says customers will be able to rent robots too. He adds that they were working on determining an affordable price for end users.

"Renting a robot may be a more attractive option for customers as they will experience features of robots firsthand," he said.

"We have a huge demand. The factory has 22 lean production lines," he said.

The company chairman said that they managed to drop production cost for a component which would cost TL 15,000 ($4,100) if imported to TL 600 thanks to domestic production.

A team from private Sabancı University is credited for building the country's first humanoid robot called SURALP in 2010, though it is not mass produced yet.