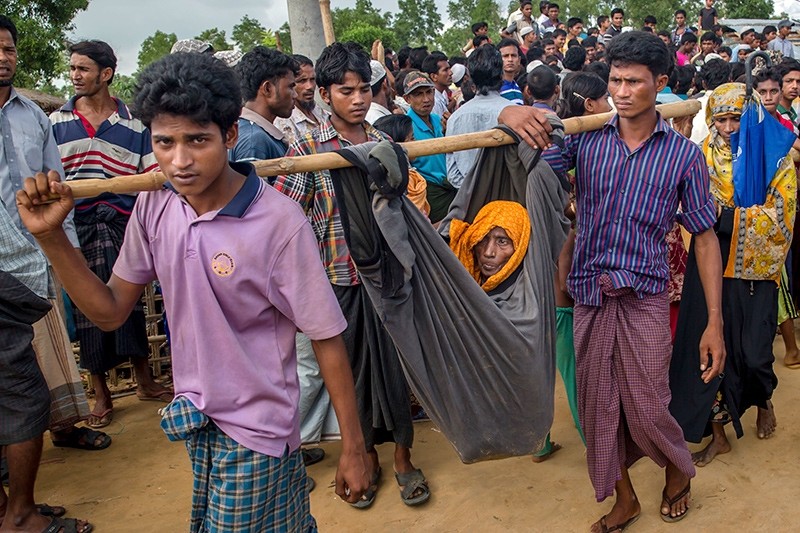 Rohingya Muslim men, who crossed over from Myanmar into Bangladesh, carry their mother in a cloth tied to bamboo stick at Kutupalong refugee camp, Bangladesh, Monday, Oct. 23, 2017 (AP Photo)
by Anadolu Agency Oct 23, 2017 12:00 am

Turkey has raised a donation of more than 80 million liras ($21 million) since 2012 to help Rohingya being persecuted in Myanmar's Rakine state, head of the country's emergency management authority said.

He said Turkey is still waiting for the allocation of the land in Bangladesh to set up a camp for Rohingya Muslims.

Since Aug. 25, more than 603,000 Rohingya have crossed from western state of Rakhine into Bangladesh, according to the U.N.'s migration agency's latest report on Monday.

The refugees are fleeing a military operation in which Myanmar's armed forces and Buddhist mobs have killed men, women and children, looted homes and torched Rohingya villages. According to Bangladeshi Foreign Minister Abul Hasan Mahmood Ali, around 3,000 Rohingya have been killed in the crackdown.

Güllüoğlu said that Turkish people, alongside the government, become participants of aid campaigns.

People can donate 10 Turkish liras ($3) by typing "ARAKAN" (old name of Rakhine) in an SMS and send it to 2868 or else through bank transfers, Güllüoğlu reminded.

The U.N. documented mass gang rapes, killings -- including of infants and young children -- brutal beatings, and disappearances committed by security personnel. In a report, U.N. investigators said such violations may have constituted crimes against humanity.