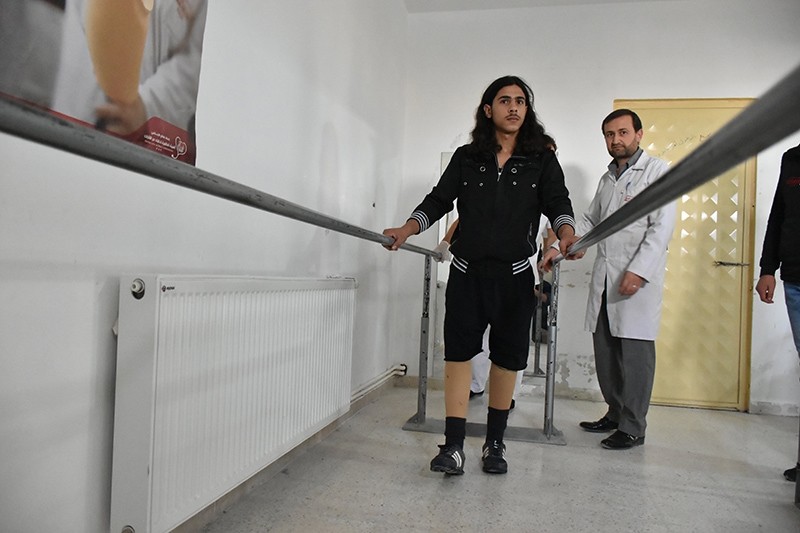 Sixteen-year-old Syrian refugee Ahmed Dabul, who lost both his legs in a regime airstrike last year near Syria's northwestern Aleppo province, is learning to walk again thanks to a new pair of prosthetic legs provided by Turkey.

He received his prosthetic legs by a medical organization Physicians Across Continents (PAC) in Turkey's southern Kilis province.

"These prosthetic legs will help my son [walk]. He has received a new life, thanks to the facilities provided by Turkey," Ahmed's father Sulaiman Dabul told Anadolu Agency in an exclusive interview.

Ahmed was lucky to have survived the attack. Three of his friends, who were with him when the mortar shell fell, lost their lives.

The teenage boy was brought to Turkey for treatment.

Ali Sarhan, a Syrian physiotherapist at the center, said Ahmed was given prosthetic legs after necessary medical checkups.

"We first had him walk on normal devices. Now he can walk on his own," he said.

The center has been giving free-of-cost treatment in Kilis since 2013.

Syria has been locked in a vicious civil war since 2011, when the Assad regime cracked down on pro-democracy protests with unexpected ferocity. Since then, hundreds of thousands of people have been killed in the conflict, according to the U.N.