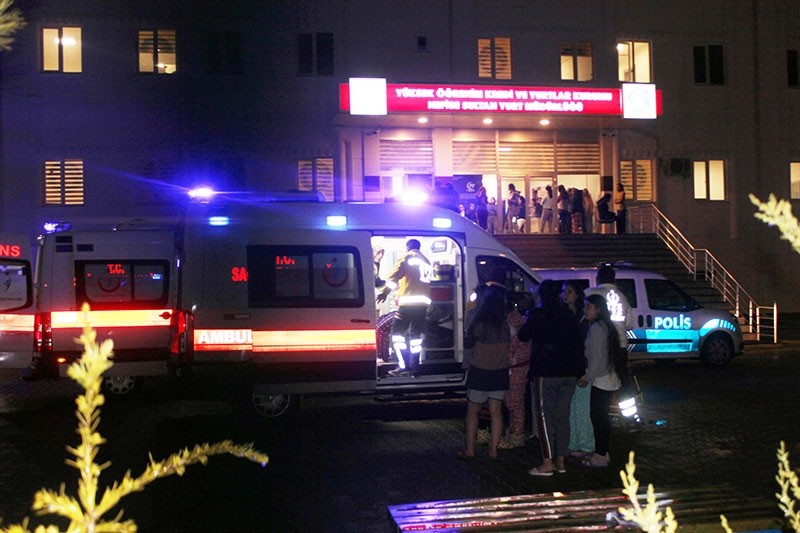 A prank organized by three students at a girls' dormitory in central Turkey's Karaman ended unusually bad for the pranksters as the incident gained nationwide coverage upon a terror scare and caused a nearby university to cancel its midterm exams.

The whole ordeal started on Sunday when several students staying at the public-owned Nefise Sultan Girls' Dormitory claimed they saw someone dressed in all black with his/her face covered with hair entered the rooms in the middle of the night, woke them up and told them something in Arabic or left notes bearing messages such as "it's your turn," or "you're going to die."

As the incident was heard by other students staying at the 1,400-capacity dormitory, panic loomed and the students wanted to leave the building in the middle of the night, only to be convinced not to do so by dormitory personnel.

The mysterious incident then went nationwide as eight students became hospitalized due to nervous breakdowns, while many others had to be treated by first responders who arrived in the dormitory premises with ambulances.

On Monday, the Karaman provincial branch of the General Directorate of Higher Education Credit and Dormitories Agency (KYK) launched an investigation into the incident and said that neither security camera footage nor entrance records showed any stranger/s entering dormitory premises. The Karaman Governorate also stated later in the day that the issue seemed to have stemmed from the "excessive" behavior of several students. Police also imposed measures to assure the students' safety.

Despite assuring statements from authorities, many students were seen leaving the dormitory while concerned parents flocked to the facility to pick up their children.

The students told reporters that such incidents had been going on in the dormitory for the last couple of weeks and they were under great stress. Some even said that they have been pushing their desks behind their doors to prevent the intruder from entering, whereas some others said they left glass bottles to hopefully wake up from its noise.

The incident soon started to be called the "Samara" incident in Turkish media since some of the students likened the intruder to the character Samara Morgan of the 2002 horror movie "The Ring".

The mystery and the absence of students prompted Karamanoğlu Mehmet Bey University to postpone all midterm exams scheduled for Monday, causing more students to leave the dormitory.

Following a detailed investigation by KYK investigators and police, which included testimonies from over 200 students, the truth behind the scare was revealed on Tuesday.

In their testimonies before the police, three students admitted that they painted their faces for a prank, however, claimed that they had nothing to do with the notes.

In a statement, the KYK said that disciplinary proceedings have been launched against the 'prankster' students.