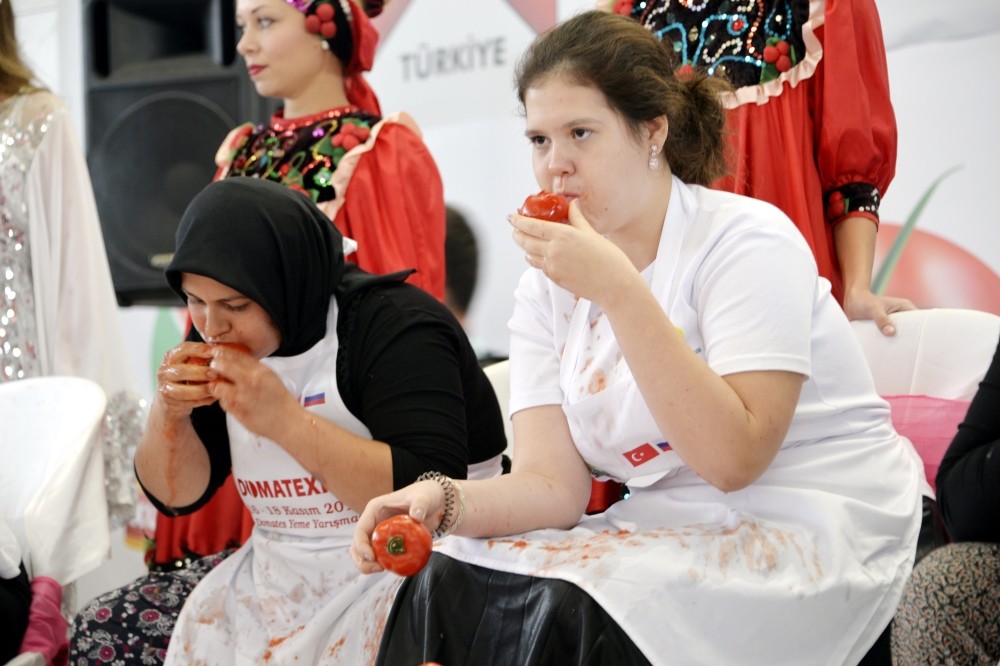 Turkish and Russian women compete to eat the most tomatoes in three minutes.
by Compiled from Wire Services
Nov 17, 2017 12:00 am

Tomato exports from Turkey to Russia have been a point of contention between the two countries despite resolving disputes in other fields two years after a relationship crisis.

Russia's insistence on banning imports finally came to an end on Nov. 1.

Yesterday, women farmers from both countries came together in a tomato eating contest, symbolizing an end to the problem. Ela Karakaya of Turkey won by consuming 1.6 kilos of tomatoes in 3 minutes while Lera Starkova from Russia came in second, eating 722 grams in 3 minutes.

The contest was part of the Domatexpo Fair in Antalya, a southern city popular among Russian vacationers and expats. The event brought together tomato growers in Antalya, which is a hub of exports to Russia.

Food and Agriculture Minister Ahmet Eşref Fakıbaba was among the guests at the fair. He said Antalya farmers would hear "good news soon" about the tomato conundrum between the two countries. Although Russia lifted the ban on imports earlier this month, it is still limited.

"Our president and [Russian President Vladimir] Putin talked about this in Sochi earlier this week," Fakıbaba said.

"We value our relations with our Russian brothers and sisters. It wasn't the end of the world when the plane was shot down," he added, referring to the downing of a Russian jet near the Syrian-Turkish border by the Turkish military two years ago that virtually brought a halt to bilateral relations.

Turkey, which produces 70 percent of tomato imports to Russia, faced a Russian embargo as of Jan. 1, 2016.

The country imposed import sanctions on many Turkish products such as tomatoes, oranges, apples, apricots, broccoli, mandarins, pears, chicken and turkey, which were later lifted after normalization talks began, except for tomatoes. Thus, tomatoes became a somewhat satirical symbol of the state of relations.