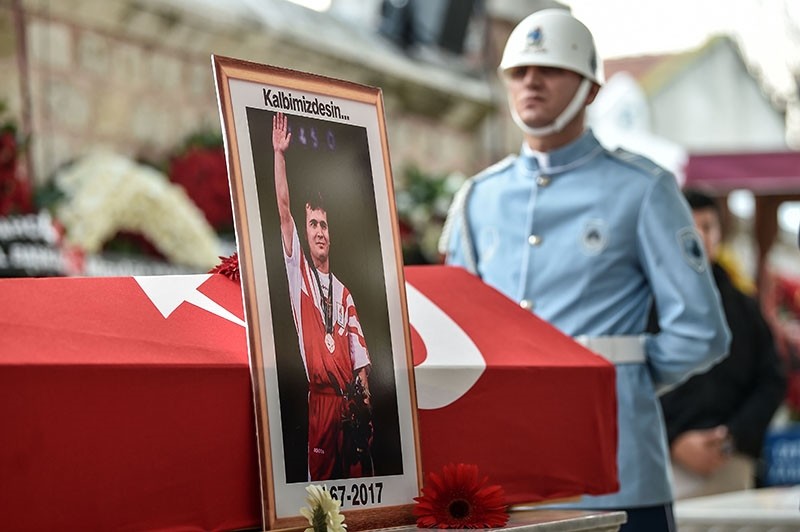 A police officer stays next to a coffin of Turkey's legendary triple Olympic gold-medal winning weightlifter Naim Su00fcleymanou011flu on Nov. 19, 2017 during his funeral cerenomy in Istanbul. (AFP Photo)
by Compiled from Wire Services Nov 19, 2017 12:00 am

One of the most famous sports personalities of Turkey, Naim Süleymanoğlu, was laid to rest Sunday, a day after the legendary weightlifter passed away at age 50

Tributes poured in Sunday for the legendary weightlifter Naim Süleymanoğlu, who held three Olympic gold medals and multiple world and Olympics records and was laid to rest in Istanbul one day after passing away at the age of 50 due to liver failure.

"Pocket Hercules," as the Turks called him; the diminutive weightlifter – only 1.47 meters (4 foot 8 inches) tall – was placed under intensive care in September. After a brief recovery, his condition worsened once more before his death at an Istanbul hospital.

Born to Turkish parents in Bulgaria, Süleymanoğlu competed for the then-Communist Balkan country before switching sides to Turkey. His consecutive wins in Seoul, Barcelona and the Atlanta Olympics between 1988 and 1996 made him a household name in Turkey and in the international sports community.

He inspired many young men and women to weightlift in Turkey and elevated the country's success in international sports events other than football.

Halil Mutlu, another Bulgarian-born Turk who immigrated to Turkey three years after Süleymanoğlu, added to Turkey's roster of triple gold medal winning weightlifters. Mutlu was among the athletes who paid farewell to Süleymanoğlu Sunday at Istanbul's Fatih Mosque.

Greek weightlifter Valerios Leonidis, whose competition in the men's 64 kilogram category was a very popular part of the 1996 Olympic Games in Atlanta, also attended to the funeral.

"On many occasions, he succeeded to raise our flag with a crescent and moon up to the flag pole and made 80 million of our people proud. I once again offer my condolences over death of legendary sportsman Naim Süleymanoğlu who we lost at a young age", Yıldırım said.

Süleymanoğlu's body was interred at the Edirnekapı Cemetery.

Süleymanoğlu was destined to success at the age of just 15 when he broke a world record in a weightlifting championship in Brazil. Yet, he truly shined after he defected to Turkey during the Weightlifting World Cup in Melbourne in 1986, as he missed his first chance at Olympic success in 1984 when Bulgaria joined the Soviet boycott of the Los Angeles games.

It was a time when the Communist regime in Bulgaria stepped up pressure on the Turkish minority in the country and Turks were forced to flee into neighboring Turkey.

Turgut Özal, then-prime minister, is credited with the covert Turkish operation to bring Süleymanoğlu to Turkey. Aboard Özal's jet, Süleymanoğlu first flew to London and then to Ankara where he was given a hero's welcome.

Bulgaria fumed over his defection and Süleymanoğlu was initially suspended for a year. But he then stormed to victory at the 1988 Olympics, with six world and nine Olympics records. Lifting 342.5 kilos at the event brought him the gold medal.

The tiny Süleymanoğlu wowed spectators with his power. He was the second man in the world to clean and jerk three times his own bodyweight.

After picking up a third Olympic title in Atlanta, he tried a comeback at the 2000 Sydney Games but suffered a rare failure. He failed to lift 145kg in three attempts and left Australia empty-handed.

Effectively retiring from weightlifting after the Sydney disappointment, he tried his hand in politics, standing as a candidate for Parliament for the Nationalist Movement Party (MHP), though he eventually lost.

Süleymanoğlu is the only weightlifter to win gold medals in three different Olympic Games. He was granted the Olympic Order by then-International Olympic Committee (IOC) President Juan Antonio Samaranch in 2001.

His exploits in Seoul in 1988 made him one of the stars of the games and Time magazine put him on the cover of its Games issue with one arm aloft in triumph under the headline: "Everybody Wins."

In the history of Olympics, he set 46 world records. In 1988 Olympics where he became the world champion, he set the record by lifting 190 kilograms in the clean and jerk.

In 2000 and 2004 he was elected to the International Weightlifting Federation Hall of Fame.