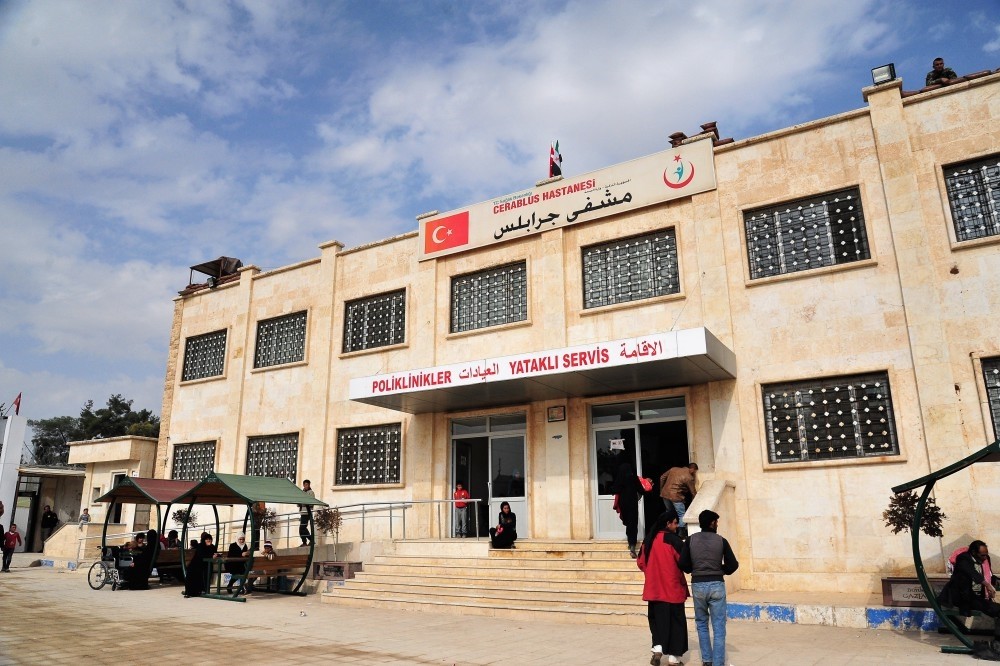 Since its opening earlier this year, a Turkish hospital opened in Jarablus, a Syrian town liberated from Daesh, has treated thousands with services not available elsewhere in the war-torn country

A hospital Turkey converted from an abandoned school became a treatment hub for Syrians in Aleppo. In Jarablus, which was liberated from Daesh by Turkey-backed Syrian opposition forces, the hospital has treated thousands since it opened after last year's Operation Euphrates Shield. The operation helped the opposition regain control of Daesh-controlled towns and paved the way for Turkey to rebuild relatively safe regions in the war-torn country.

The hospital is among the few health facilities fully functioning in the country's north, which has been devastated by the six-year civil war. It provides treatment to both locals in Jarablus and people from nearby towns liberated from Daesh.

Turkish and Syrian healthcare personnel work at the 70-bed hospital administrated by Turkish chief physician Yasin Şahin. Speaking to Anadolu Agency (AA), Şahin said Turkey's Health Ministry, the Turkish Red Crescent and governorate of Gaziantep - a Turkish province located near Jarablus - cooperated in the restoration and conversion of the building. "We aim to provide health services, which have long been unavailable in this region," Şahin said. The hospital has clinics for 14 branches of medicine and three operating rooms.

The hospital treats about 1,800 people daily, Şahin said. Turkey opened one hospital each in the towns of al-Bab and Azez, which were also liberated from Daesh.

"Healthcare in Syria is outdated compared to Turkey, both in terms of system and technology," Şahin said, adding that many services they offer are not available in Turkey.

Nour Issa, who suffered burns to her hands after a fire in her house, is among the patients at the hospital. "I am thankful to Turkey for this hospital. We will never forget their help," she told AA.

Jarablus was more or less a ghost town with only around 2,000 inhabitants under Daesh rule, but after the Turkish-backed operation, its population grew again amid a rebuilding process actively supported by Turkey. Thousands who took shelter in Turkey amid the war returned. Both Turkish government and nongovernmental organizations also pursue efforts to build new housing units to accommodate the returning population. Schools in the town were also rebuilt and restored by the country. Over the last eight months, Turkey has rebuilt over 400 damaged schools in the Aleppo region where Jarablus is located, enabling 152,000 children to continue their education.

Syria has remained locked in a vicious civil war since 2011. Since then, hundreds of thousands of people have been killed in the conflict and millions more displaced, according to U.N. figures.