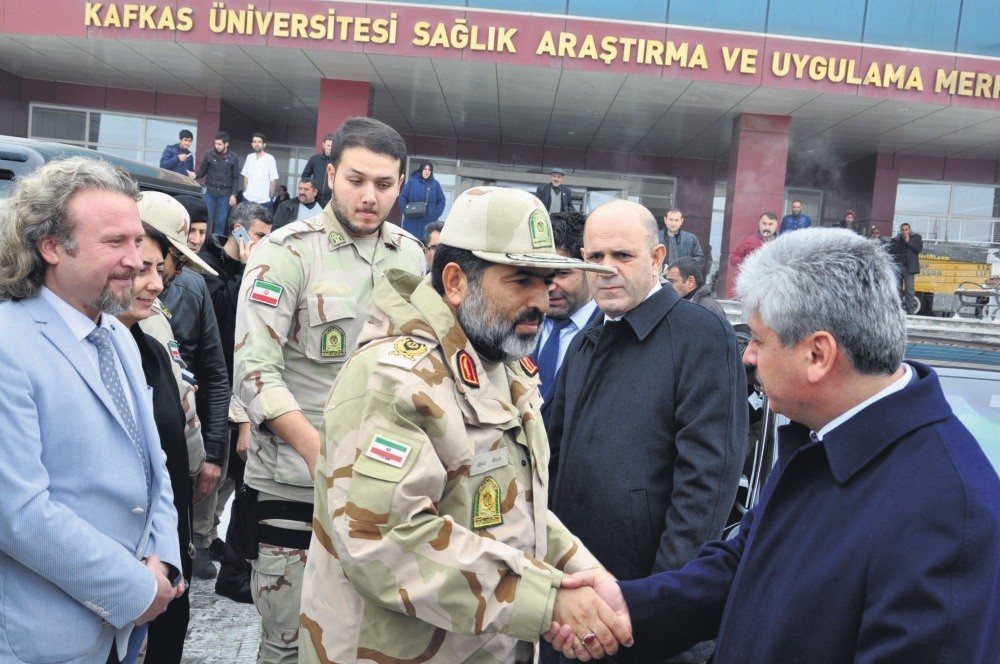 Iranian military officials shake hands with Governor of Turkish province Kars outside the hospital where the injured are taken to. Injured soldiers and engineers were airlifted to hospitals in Kars and Iu011fdu0131r in Turkey.
by Compiled from Wire Services Dec 06, 2017 12:00 am

One Iranian soldier was killed and three civilians were injured in what Turkish officials have called an attack by the PKK terrorist group on the Iranian side of the Turkish-Iranian border late Monday. The injured were dispatched to hospitals in nearby Turkish cities as they were far from residential areas on the Iranian side. Foreign Minister Mevlüt Çavuşoğlu telephoned his Iranian counterpart Jawad Zarif after the incident and extended his condolences, media outlets reported. The attack comes a few months after two countries signaled a closer cooperation against the terrorist group which also has a branch in Iran.

The casualties were members of a team of engineers working on an irrigation project, news reports say. Soldiers were providing security for the team at the time of the attack.

Enver Ünlü, governor of Iğdır province where the border is located, told reporters that the attack by a "separatist terror organization" a name given to the PKK by Turkish officials targeted three civilians and four soldiers. "The survivors sought help from the Turkish side and the injured were airlifted to hospitals here. A soldier succumbed to his wounds at the hospital. Others are recovering from their injuries," he said.

The governor said security measures were elevated on both sides of the border after the attack. He noted that Interior Minister Süleyman Soylu ordered the placement of a crisis desk after the incident. "We had a meeting in Iran 10 days ago about border security. This incident proved how necessary it is to wipe out terrorist groups in this region through joint cooperation [between Iran and Turkey]," the governor said. Sait Israfdul, one of the engineers who escaped the attack uninjured, told reporters gunmen opened fire on them when they were working, and they asked for help from Turkish soldiers guarding the border. Israfdul thanked Turkish officials for coming to their aid.

Turkey, which recently increased cooperation with Iran in various fields, also boosted its counterterrorism efforts against the PKK and its Iranian branch, the Kurdistan Free Life Party (PJAK). Turkish and Iranian officials had recently discussed measures against the PKK.

The PJAK, which is associated with the Kurdish Communities Union (KCK), the umbrella organization for the armed terrorist organizations of the PKK, is the Iranian branch of the terror group. In Syria, the group goes by the name Democratic Union Party (PYD) and its armed wing the People's Protection Units (YPG). Although the PKK was headquartered in Syria until 1998, currently, the terrorist organization is now controlled from its headquarters in northern Iraq's Qandil Mountains.

The PKK, listed as a terrorist organization by the U.S. and the EU, resumed its nearly 40-year armed campaign against the Turkish state in July 2015. PKK leader Abdullah Öcalan stated in an interview with the Iraqi television network Zelal in 2013 that, "I founded the PYD as I did the PJAK."

In November, Turkish, Iranian and Iraqi forces launched their first joint operation against the PKK in northern Iraq. Turkish fighter jets carried out airstrikes on PKK positions in Iraq in the operation coordinated with Iranian and Iraqi intelligence.